Batman Arkham Knight will release for the PlayStation 4 and Xbox One on June 23rd this year after having been delayed twice. The ESRB has announced that it has awarded the game an “M” rating. This is significant for a few reasons.

Below is a video from our friends over at FamilyGamerTV.com. They have some thoughts about the upcoming game and what the rating could mean.

Below is the text directly from the ESRB website regarding the four different Batman games that have been released.  It is of particular interest that the four ESRB entries contain a lot of the same content. They all reference hand to hand combat, a short list of bad words, and some suggestive language. Batman: Arkham Knight received an M rating in spite of all of that. The video above provides some predictions, but no one has real hard data because the “offending” material is likely caught up in story spoiling cut scenes.

We can assume out of the gate that The Joker will play a role in this game much like he has all of the prior releases, and it would not surprise me to Rocksteady (the developers) wrote a darker plot for him to act out. Arkham Knight is, after all, intended to be the final game in the Arkham series.

Whatever it is, we do know hat Warner Brothers has signed off on it and are letting Rocksteady end their trilogy as they see fit. We will have to keep an eye out for more details as the game comes closer to release. (We will have a guest writer reviewing the game for us to make sure we provide whatever details we can.)

“This is an action game featuring characters from the Batman franchise. Players assume the role of Batman as he fights (never kills) his way through a psychiatric hospital populated by psychopathic criminals and humans infected with a toxic virus. Players can punch, kick, and use weapons (spikes, light beams, and other gadgets) to defend against the onslaught of enemies. Some attacks are highlighted by special effects, such as slow-motion hits and close-ups of damage inflicted. During the course of the game, players can enter rooms with blood stains on the ground and walls or witness the ‘infected’ twitching and screaming in pain. Some inmates and guards are strewn unconscious/dead on the asylum floors, while others are tied-up, strapped to torture devices, or are being tortured (e.g., a guard suffering in an electric chair). Two female characters wear provocative outfits that expose deep cleavage and/or partial buttocks, and one of them moans suggestively when she is in peril. Players are occasionally required to identify and track traces of whiskey/tobacco during missions. Some expletives (e.g., ‘b*tch,’ ‘damn,’ and ‘pissed’) can be heard in the dialogue.” 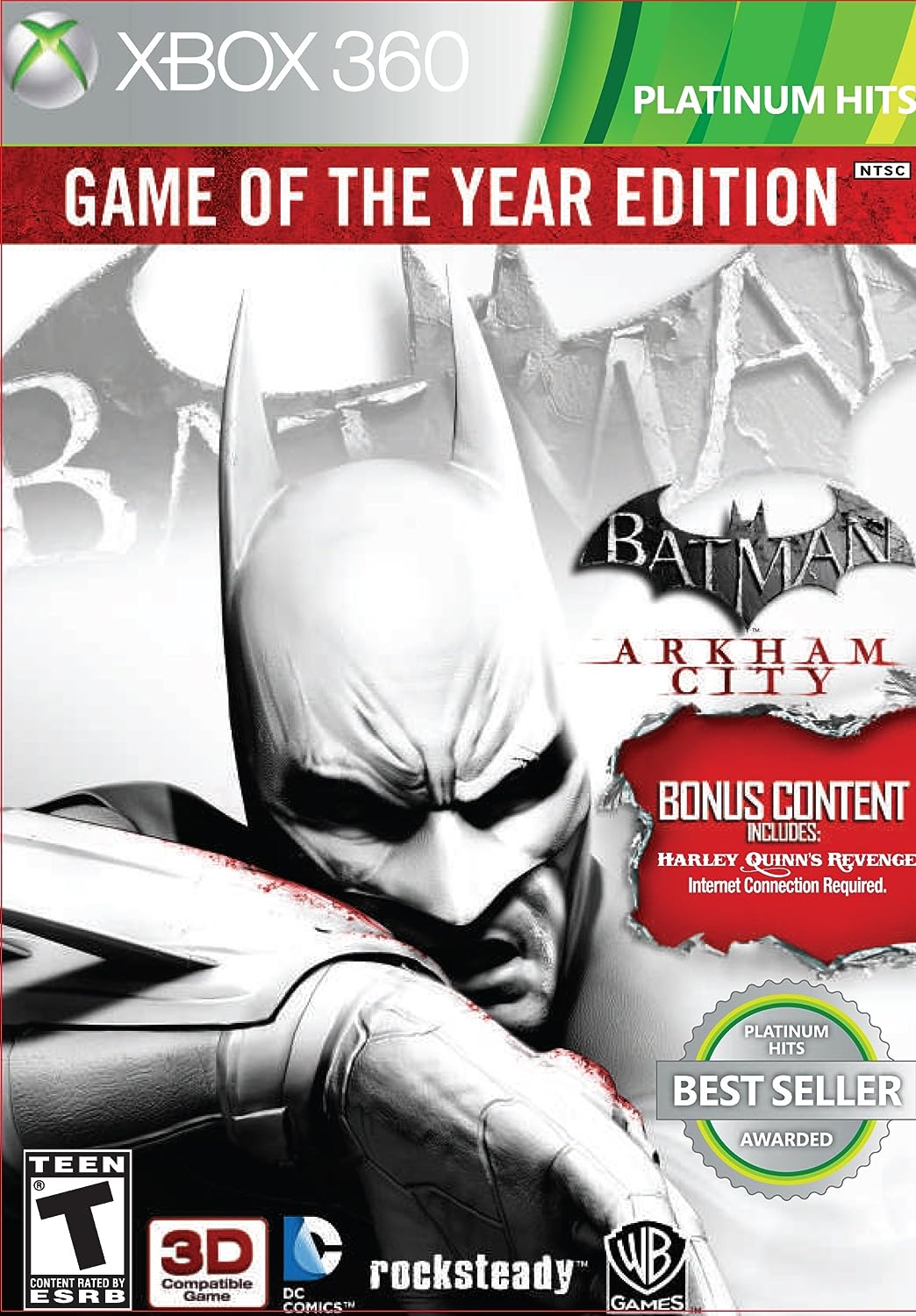 “This is an action-adventure game featuring characters from the Batman franchise. Players assume the role of Batman as he investigates Arkham City, a neighborhood overrun by psychopathic criminals and former prison inmates. As players explore the city and infiltrate hideouts, they punch and kick criminals in melee-style combat, using various gadgets (e.g., explosive gel, smoke pellets, a grappling gun) to defend themselves against gun-wielding thugs and villains. The frenetic combat is highlighted by cries of pain, punching sounds, realistic gunfire, and slow-motion effects. In some sequences, players must solve puzzles or use stealth to incapacitate enemies and free hostages; when players fail a challenge, the hostage will lose his life. Some environments contain bloodstains on the floor or furniture; other cutscenes depict spots of blood on injured characters. During the course of the game, some female characters are dressed in form-fitting outfits that expose large amounts of cleavage; one background sign depicts the silhouette of a woman and the words “Live Nude.” The dialogue also contains some suggestive references (e.g., “The anger, the frustration, the hints of repressed sexual tension” and “Sure could go for some porn right now.”). One sequence depicts a character smoking a cigar, and there are various references to alcohol (e.g., “She got a little drunk and killed her classmates,” “I’d give anything for a nice cold beer right now.”). The words “b*tch,” “a*s,” and “bastard” can be heard in dialogue.” 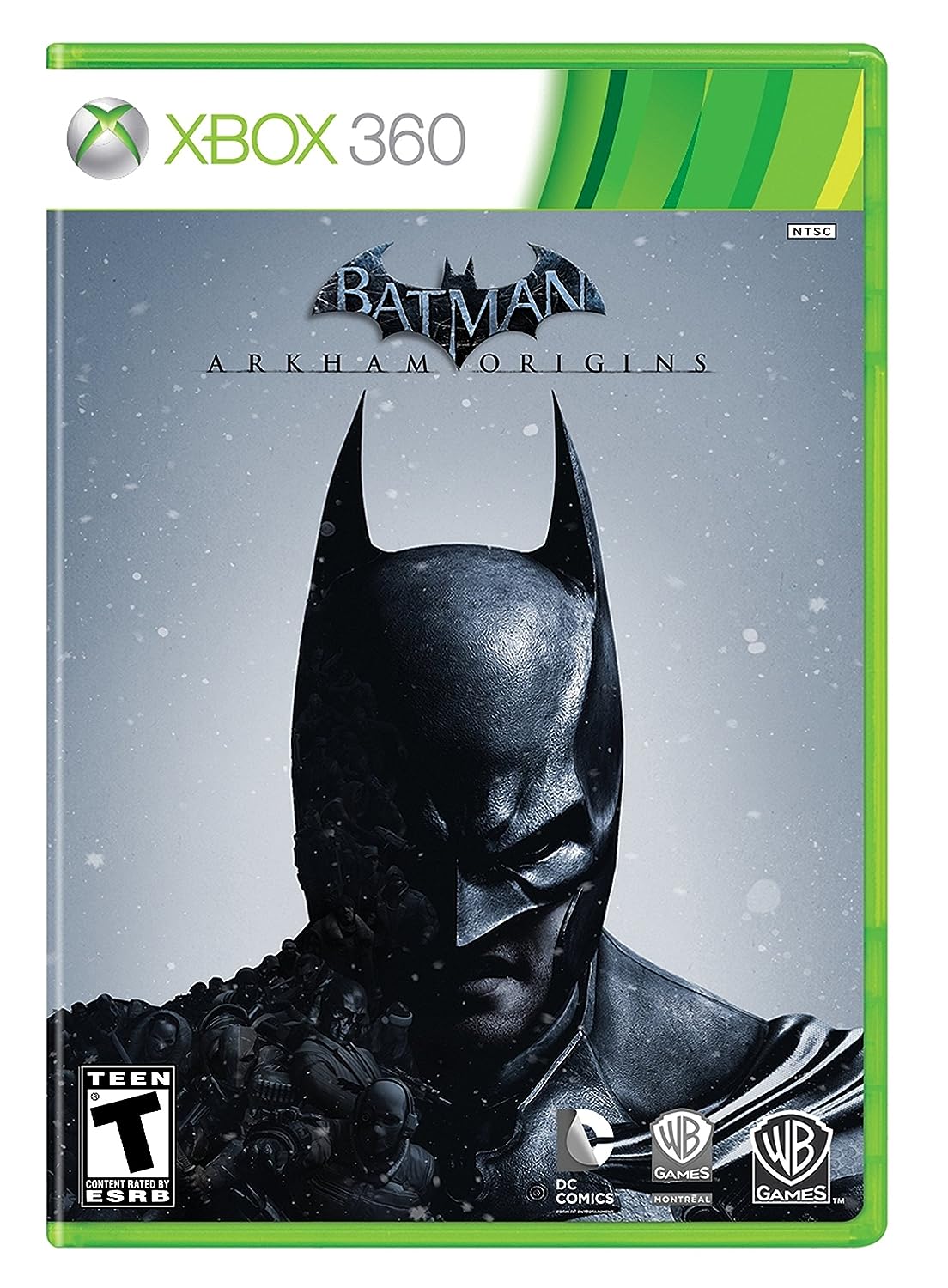 “This is an action-adventure game featuring characters and storylines from the Batman universe. Players control Batman through urban environments as he solves crimes, battles thugs, and searches for villains. Players punch, kick, and use fantastical weapons (e.g., electrically charged gloves) to defeat enemies. Some characters use guns against Batman, and the game’s multiplayer mode allows players to engage in third-person shooter matches. During murder-investigation scenes, short animations depict various stages of the crimes (e.g., a victim’s head slammed onto a table; a character getting shot). A handful of scenes depict corpses on the ground, hanging on walls, or arranged in strange poses; some of these scenes depict bloodstains on the floor. During the course of the game, the camera pans on a villain briefly groping the posterior of a female character. The game depicts drug packets in one scene, and several characters discuss illegal narcotics and drug charges. The words “sh*t,” “a*s,” and “bastard” appear in the dialogue.” 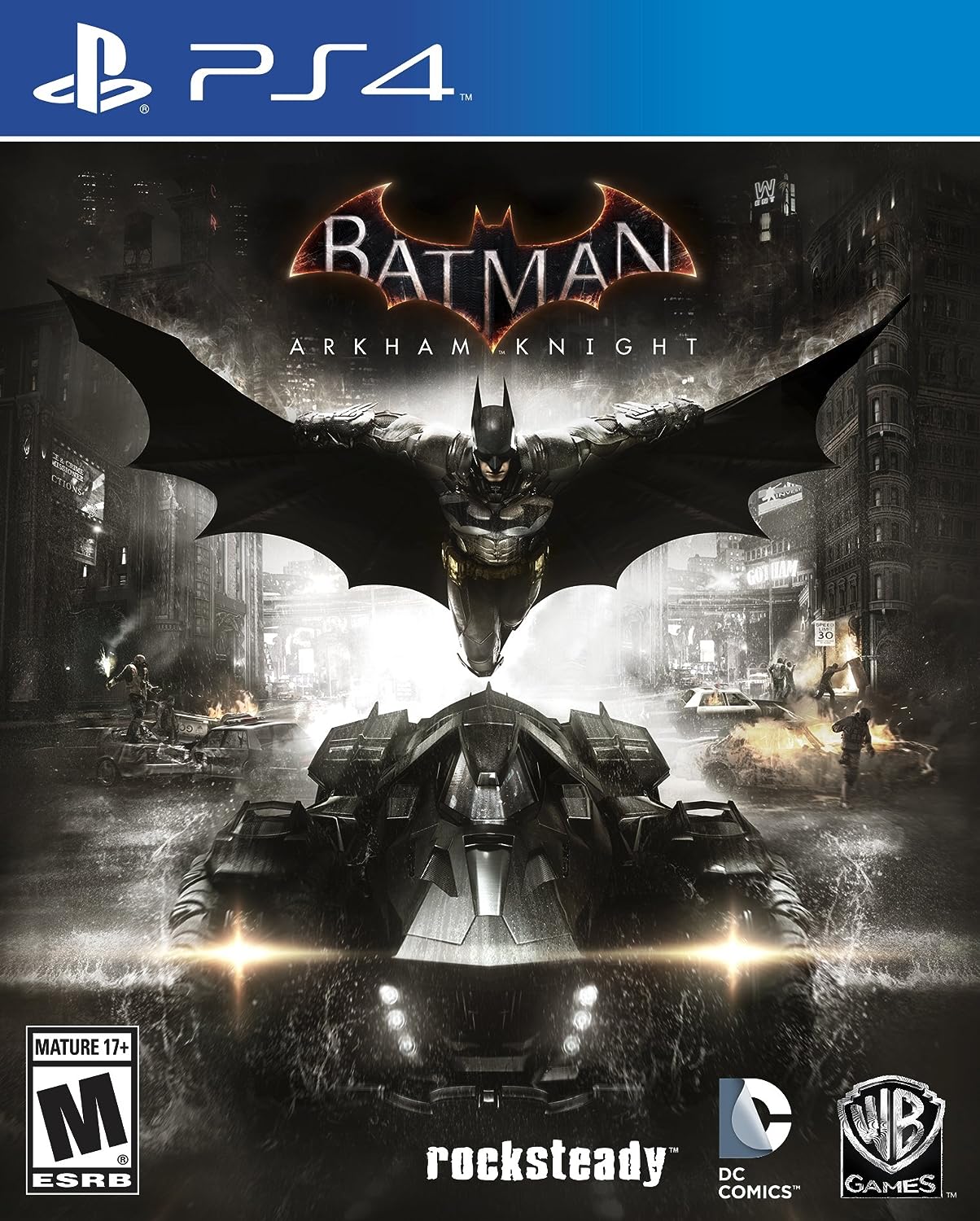 “This is an action-adventure game in which players primarily assume the role of Batman as he battles several villains spreading chaos across Gotham City. Players traverse a variety of locations around Gotham while battling thugs, examining crime scenes, and occasionally rescuing hostages. Players engage in melee-style combat using punches, kicks, and gadgets (e.g., batarangs, explosives). Enemies cry out in pain when struck, and some takedowns are highlighted by brief slow-motion effects and loud impact sounds. Some sequences allow players to use tank-like vehicles with machine gun turrets and rockets to shoot enemies; a vehicle’s wheels are also used to torture an enemy in one sequence. Cutscenes depict characters getting shot (on and off camera) while restrained or unarmed. Large bloodstains/pools of blood appear in crime scenes and in the aftermath of violent acts; one room depicts a person torturing a character on a bloody operating table. During the course of the game, players can shoot unarmed characters and a hostage. Neon signs in a red-light district read “live nude girls” and “XXX.” The words “b*tch,” “gobsh*te,” and “a*s” appear in the dialogue.”