Editor’s Note: This article has been updated to reflect the links to the new Deadwood: The Forgotten Curse game launched April 14, 2015.

Editor’s Note: We have awarded Deadwood: The Forgotten Curse our award for Game of the Show For Pax East 2015. Read on to find why!

Do me a favor.

First: Picture the Legend of Zelda.

Second: I want you to picture Pinocchio.

Finally: Jam them together and make a game out of it.

That is pretty much what Steamroller Games is pitching us all on Kickstarter right now and I, for one, am very excited for it. The elevator pitch is straight forward. You play as Lathe (Yes. This game is made by a bunch of dads so I fully expect the “Dad Jokes” to flow) as he fights to hold back a curse from spreading across Knottington.

The day and night cycle is something that adds a LOT to the game. By day he is accompanied by a giant stone golem called Roguard. He is massive, powerful, and has your back. That all changes every night when he falls asleep instantly and becomes more than a little vulnerable. You have to stop all of your light exploration and build walls, lay down mines, and fight off a horde of wooden zombies infected by the Deadwood.

I have to admit that when I first met these guys at PAX East I had my doubts. The concept looked cute, but I wasn’t sure that it would play well. Fortunately, they had a very early playable demo of the game that helped give players an idea of what this game will turn out to be.

Players spend each day wandering around a colorful landscape collecting materials that they will need to use at night to build a makeshift fortress to protect your golem friend. it plays like a twin stick shooter (like Geometry Wars) in that you move with one stick on the controller and aim your peashooter-esque gun with the second stick.

The peace and wonder that I experienced during my daytime wanderings lulled me into a restful state that made me PAY once night fell. Dozens of Deadwood monsters popped up out of the ground and immediately started attacking my friend. The demo cheated a bit in my favor by giving my Golem friend infinite health. I was not so lucky and was dead quickly. The best part is that I knew exactly what I did wrong though so dying didn’t frustrate me.

Kids that start playing this game will feel immediately at home in the day/night cycle based on their experience with Minecraft. In fact, this mechanic will help kids jump into the game and find success in spite of the challenge. 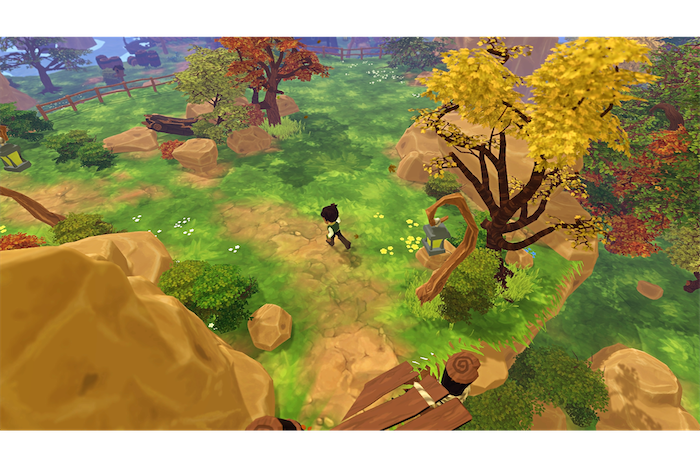 I played for about ten minutes and I was sad to have to walk away. It was gorgeous, and the game played much smoother than it should considering the game is expected to come out in the Fall of next year.

I cannot express enough how important I think this game is. This group of dads is doing some great work here. Head on over to Kickstarter and back this project. It will cost $15 for a copy of the game and to help get this beautiful game made.

Keep your eyes on Engaged Family Gaming for more updates as the game comes closer to release!

Editor’s Note: Through 4/15/15 you will be able to back this project and get a copy of the game on STEAM for $10 when it is complete!