We were lucky enough to be provided an early release prototype of the two player board game Wizard Dodgeball last week. It is currently on Kickstarter and, while it has a way to go, looks like it is building a decent fan base! We spent some time over the last few days playing a bunch of games and we can see why. To be blunt: Wizard Dodgeball is crazy good.

The premise is simple. Each player controls a team of five wizards as they take turns moving around the court on a grid picking up, throwing, and catching a set of dodgeballs. The action is fast paced as players will alternate turns controlling one of their wizards. This ensures that no one feels like they are watching their opponent play solitaire during the match. 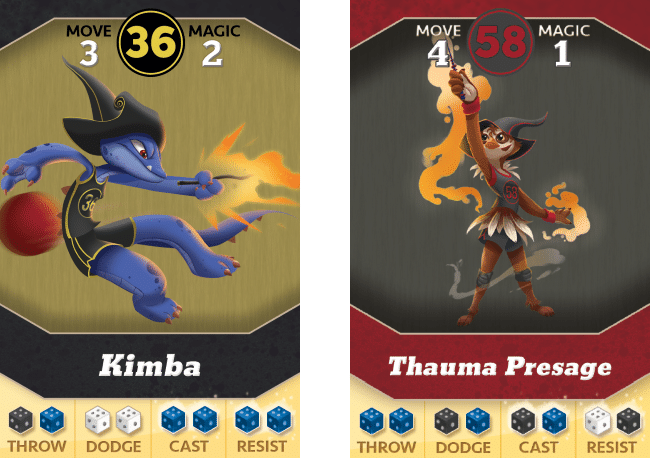 Man these wizards would look cool! Back this project and make it happen!

All of the action is determined using contested dice rolling based on the characters stats. It took reading through the rules a few times to really understand it, but once we took our time and just played a few rounds it made sense immediately. The uncertainty of landing a hit (and the possibility that your opponent could roll doubles and catch the ball to eliminate you) added a lot of tension to every round. Nothing was a given. A lucky die roll by an exposed player can help bring a team back from the brink since the catch eliminates the thrower AND brings back one of the eliminated wizards on the catcher’s team!

It is hard to say what the final components will look like once the Kickstarter is complete, but there is concept art available on the Kickstarter page. The prototype version we received included a game board that looked as close to a final revision as we can imagine. It was well made and really evoked the feeling of playing on a wooden dodgeball court.

Wizard Dodgeball will be an immediate hit with anyone who enjoys the whimsical side of the wizarding world of Harry Potter. Many of the characters in the game feel like they jumped out of those stories and came to find a home here. My oldest son is halfway through the series and was immediately drawn to the various wizard characters. This was important as it kept him engaged and wanting to learn to play the game even if some of the deeper strategies were tough for him to grasp. Any game that makes a child want to stick with a game even if it might be very challenging for them is a winner in my book!

If you are looking for a two player game that will bring out your inner wizard then this game is a must own. Head over to the Wizard Dodgeball Kickstarter page and back it right away! You will not regret it.