The Pericles Group sent us a prototype prior to heading out onto the convention tour and we have spent a lot of time “kicking the tires” and playing through it. We had a very preliminary copy, so we are certain that some things will change between our copy and the final version, but I am pleased to report that we had a lot of fun playing this one with our family.

The first thing that caught our attention with this game was the theme. We love ourselves some fantasy games and Underlings of the Underwing is a game about dragons… and lots of them. The concept is as follows: “Once per century the dragons of Underwing return to their ancient brooding grounds for as Great Hatching.” Players control dragon handlers who must use motes of colorful energy to help hatch powerful dragons to earn points. The player who most efficiently hatches their brood of dragons and amasses the most dragon points will win the day! This was a simple and straight forward theme that was easy for our younger players to get excited about and didn’t get in the way of the fun either. 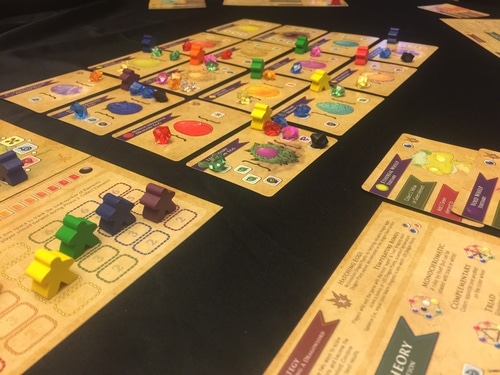 Underwing is a worker placement game at heart. Each player controls a number of egg handlers that they use to either tend to (and thus claim eggs that will be hatching), or go on adventures for colored gems to place on the different eggs in order to hatch them. Each egg will have different colored nodes on them that must be filled in order for the dragon to hatch. Players will want to ensure that they are gathering gems of the correct color to hatch their eggs whenever possible.

Each dragon, when hatched, will be worth a different number of points based its difficulty. Some will only require two or three crystals while others will require many more. The egg cards are dealt out randomly so each game will include a different layout. This means that you’ll need to adapt your strategy every game to give yourself the best chance of winning. Younger players struggled with this as times, but it wasn’t a deal breaker.

The eggs are represented by cards that are laid out in a 4×4 array. This is important because as the game develops there will be occasions that colored crystals end up being placed on eggs without a handler assigned to them. If enough crystals land on an unclaimed egg to make it hatch, then bad things happen. This could mean something as small as placing a gem on adjacent eggs and causing a potential chain reaction to even worse penalties. This makes it important that players work together to prevent things from getting out of hand. This is a very mild cooperative element, but it adds a lot to the game.

Underlings is not a fast game by any stretch, but it is not an hours-long slog either. I was surprised that the game wasn’t a bit tighter in length considering it is designed to be educational. I don’t think that the game could be played within a class period. This is especially true if students have to learn the game as well. With that said, I think that it would be great for an after school game club.

There isn’t a clear optimal strategy in the game either. All of our players has plenty of opportunities to develop and experiment with various strategies. Some of us went after simpler, easier to hatch eggs while others went straight for the challenging stuff and spent multiple turns working on them. It doesn’t feel like either strategy was optimal yet, but I am sure one will form once we get more time with the game. If we were to have one critique it is that the more powerful dragons might be a big too overpowered. They tended to be complete game changers when they landed into the hatchery and were claimed, especially if they came out early.

Underlings of Underwing is available on Kickstarter starting August 25th. We had a lot of fun playing this game with our family and game group. We feel very strongly that you would like it as well. Give it a look and help the game become more than a prototype!