Fantasy Flight Games has announced Star Wars: Legions, a paint and play miniatures war game at Gen Con 2017 this past weekend. It is scheduled to release during the fourth quarter in 2017 and will retail for around $80.

There are several other miniatures war games on the market like Warhammer 40K and War Machines. The lore behind those games is less than family friendly so this will mark one of the first entries to the genre that will be accessible to the whole family. I can absolutely imagine a family that has been looking for a war game to get into really diving into this one.

The game itself will come with 33 unpainted miniatures that will include Luke Skywalker, Darth Vader, Rebel Troopers, Stormtroopers, an AT-ST, and 74-Z Speeder Bikes. It will also include all the the extra materials you need to play the game, like cards and dice, and some rudimentary terrain. There will also be expansions available after release that will increase the size of the armies and will likely allow for some great fantasy matchups. 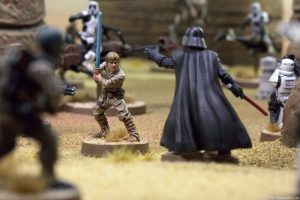 One thing that is going to be a major difference between Star Wars: Legion and other games in the genre is that Star Wars lore is already very established. Darth Vader is a very specific and well known character. This limits the customization options for players who like to do that sort of thing with their figures. Kit-mashing and custom paint jobs won’t necessarily be common as a result. On the other hand, though, I think one could argue that the iconic characters will be just as attractive in the long run for some people.

Fantasy Flight is making aggressive use of the Star Wars License. I can’t say that I blame them considering how popular the brand is recently. This is the most recently in a slew of other games including Star Wars: Armada, Star Wars: Imperial Assault, and Star Wars: Rebellion.

If this sounds like something you are interested in, then you should make a point to check out the Star Wars: Legions mini-site on the Fantasy Flight website.

Restoration Games is Bringing the Heat With Fireball Island: The Curse of Vul-Kar!