Top Posts
Gaming Definition of the Week: Analysis Paralysis
Tips for Playing Dungeons and Dragons with Kids!
How to Play “Frustration” – an EFG Family...
Great Games to Make You Laugh
Raising a Chess Prodigy: Tips and Tricks for...
EFG Essentials: Great Board Games for Kids
8 Games From Essen Spiel 2022 That We’re...
11 Board Games That Help Teach History!
Family Board Game Review: Fyra
Tips for Completing Jigsaw Puzzles
Home » Kickstarter Campaign of the Week: Dobbers: Quest for the Key
Board Games

Dobbers: Quest for the Key is an encounter building, deck building, strategy game that is currently live on Kickstarter. It was designed and is being brought to Kickstarter by Darryl Jones. He took the time to answer some questions for us about his campaign. Take a look below and check out the campaign!

Dobbers: Quest for the Key is a whimsical, high-fantasy, family game for ages 8 and up.  It is a 2-4 player game, which usually takes about an hour to play.

Dobbers: Quest for the Key is a whimsical, family friendly board game for 2-4 players. It is an encounter building, deck building, strategy game. Create surprise encounters for your opponent while building your deck and equipping your hero. The mechanics are simple enough for children to enjoy with engaging strategies for adults. It has a high fantasy theme, with comic-book style, bold illustrations. There are two basic strategies essential to winning the game:  Placing challenging encounters on the board, preventing other players from being able to advance along their chosen path. Equipping your hero and building up your personal deck so that you can more easily overcome any encounters that have been placed along your path.

The game mechanics and testing are complete. There will be refinement with Kickstarter feedback of course, and there is still quite a bit of illustrations to complete for cards.

Clank and Legendary are both deck builders that use a game board, but I’ve not seen any other deck builder that allows you to build encounters for your opponents. I believe it’s a very unique process.

When I was younger, my Grandpa would say, “Keep your dobbers up!” when I felt down. I never really knew what a Dobber was, so I decided to create them. Inspired by the legends of fantasy creators, they became little gnome-like creatures living in the forest. Later, I decided to write and illustrate a comic book. I self published it in 2001. My career as a designer took over shortly after that, and it sat dormant for a while. Marriage, kids, work, all those things progressed.

A few years back I got into gaming in a big way once again. I wanted more games that could “thread the needle” between challenging strategy and young player engagement. The Dobbers never left the back of my mind. I started talking about it with my son and inspiration struck! We were going to make a board game! I focused on mechanics and design while he helped flesh out a lot of theme ideas. He also had a lot of input on what would make the game fun for him. There’s a lot of story involved, though all of it may not come out in our first board game, the story will unfold as we publish more games in the series.

It started with index cards for the cards and graph paper for the board. Next I laid out a card template in Illustrator, printed and cut out a bunch. There were blank spaces for each of the stats needed, so I could fill them out, test, replace and do it all again. This made for a quick way to iterate testing and balancing. Slowly I began working on illustrations, icons and other common design elements that would be necessary. All the while, continuing to test and brainstorm with my son. After a few months, we got our first set of cards printed at Staples. They looked pretty bad. My colors were too dark and the difference in groups were too subtle.

I redesigned the borders, frames and color schemes. We took it to GenCon in 2017 to play test with strangers. It went really well. Almost all positivist feedback. I’ve done a little more refinement on the frames and other common elements. Now, in addition to finishing illustrations for the individual cards, I’m working on graphics for the rules, promotional items and box. I expect the process will go through another round of refinement as I get feedback and suggestions from the Kickstarter community.

As mentioned before, the goal was to create a game that was engaging for kids, but still something an adult could sink their teeth into. I think we’ve done that. Kids will enjoy the art and be swept away by the idea of equipping their hero while putting cool monsters in front of their opponent. Younger kids will get to practice basic addition and subtraction. My hero’s = 1 +1 for her sword +1 for her armor and she is facing a location that totals 4, who wins? And adults will enjoy finding the perfect card combination to over come even the most challenging encounter. It’s got it all! 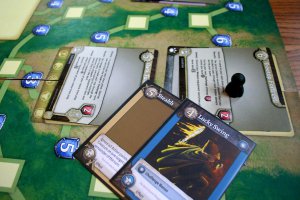 A little over a year.

For Dobbers: Quest for the Key, I am the Game Designer, Graphic Designer, Illustrator, R&D, Marketing, Web Development and everything else guy. Wow, there is so much to do! Apparently most people have a team to publish a game. I completely underestimated it all. I expect to have a little more help for my next game.  I’ve found that the number of individual illustrations to create is a huge time investment. I might have changed a few concepts earlier if I thought there was a way to make some illustrations reusable.

I’ve been a gamer of all kinds since the mid 80’s. It’s been my goal to be a published creator since high school. I let that goal lie dormant for a while, but now I’m glad to have it back as a passion.

A little more about me in the gaming industry. I’ve done a lot of behind-the-scenes work. Now it’s time to move a little more into the forefront. I was the designer and illustrator for a lot of classic Dwarven Forge resin sets, Realm of the Ancients, Den of Evil, the Medieval Building set and more.  I Illustrated all of the walls and other assets needed for True Heroes. A True Dungeon event was sponsored by Upper Deck at GenCon several years ago. I continue to work with Jeff on True Dungeon and have designed the logos and ads for TD for the last 10 years. I run a D&D 5 game on the ExplodingDice channel based in the world I created in 2001, the Dobbers.  And the big one – I have a board game coming to Kickstarter also in the world of the Dobbers on April 16th.

You can contact me here:  darryl@splatteredink.com. I share much of my illustration on these social media platforms, including streaming my illustration process on twitch.

The official website can be found at splatteredink.com and dobbersquest.com.