The Exorcism at the House of Monkton Falls is a worker movement game that is launching on Kickstarter April 13th.   It was designed by David Tepfer and is being published by The Screaming Brain They took the time to answer some questions for us about their campaign. Take a look below and check out the campaign!

The Exorcism at the House of Monkton Falls is a cartoonish horror worker movement game for 2-4 players age 10+, and takes 60-90 minutes to play.

Something is terribly wrong with the rural town of Monkton, Vermont. A deep colorless fog has swept across the hillside, members of the community have gone missing, and once lush farmland is dying. Locals believe that an ancient spirit haunting the old manor house of the hill is to blame. And they’ve asked you and your team of paranormal investigators to check it out, and save the town! The Exorcism at the House of Monkton Falls is a cooperative board game for 2-4 players. Takes on the role of paranormal investigators an exorcise a powerful spirit from an ancient home in Monkton, VT. Explore the haunted manor, search for tools, complete tasks, and most importantly of all avoid the spirit and exorcise the house before dawn! 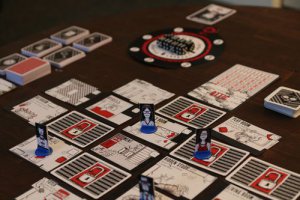 The game is currently in extended blind testing to complete the rule book but has already been through production samples with our manufacturer.

The Exorcism at the House of Monkton Falls is comparable to Flash Point, a Coop version of Lords of Waterdeep, or Euro Betrayal at the House on the Hill.

I love the horror genre. Horror movies scare me, but I love the unique way the horror genre tells stories. It was that style of storytelling I wanted to emulate on the tabletop. I found that many horror themed games are just that, Horror Themed” with no effort made to tell the story using mechanics. So, I wanted to make a horror game that did things differently.

I started with a premise. Which was to make a cooperative horror game that could give players real feelings of dread and suspense. Once I knew what the emotional reaction I wanted for people playing Monkton Falls, I started to craft mechanics that would fit that goal. Monkton Falls is an incredibly thematic game, so each mechanic and design choice was to tailor a very specific thematic feel. And through development I worked through a “check system”. Each time I would make advancements in the design I would look back and make sure whatever change met the essential intent of the design. 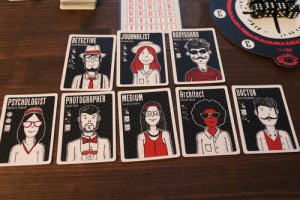 Cooperation! Monkton Falls is designed to be a game that can only be won through intensive communication and cooperation. We spent countless hours in testing to balance out the puzzle like nature of the game to the amount of in-game time players have to win. Consequently, wasted or misused actions could seal the groups fate. The decisions players make have to be made together otherwise players are sure to fail.

Our biggest obstacle was balancing the difficulty level of The Exorcism at the House of Monkton Falls. Since cooperative games rely on a randomizer to determine what the game “does” it can be very tricky to balance for every given scenario while also creating the level of challenge I wanted for the players.

Hand written slips of paper sleeved with old Magic the Gathering cards. Monkton Falls was originally fully card driven with no board. Ghosts were drawn from a deck and would attack players on each of their turns.  Meanwhile, players tried to fend them off and complete tasks with tool cards from their backpack (hand). It was fun and a step in the right direction, but it was very one dimensional and random.

I got into making games because I want more people playing games. Playing tabletop games has been a hobby for over 13 years. It wasn’t until a few years ago that I was actually open about it. I was often called a “closet gamer” by my gaming friends because I was so afraid of the stereotypes of being a gamer. I want to make games that are easy to learn and have themes that resonate in our larger pop culture. To bring people, who have shunned this hobby in the past, to table and ready to play.

My company, The Screaming Brain, also produces a weekly blog and monthly podcast all about getting the most out of the board game hobby. We don’t do reviews or news. We focus on whatever we can do to get you into the hobby, or how to enrich your experience with tabletop games.