Kickstarter of the Week: Clear the Decks!

Naval warfare has never been so exciting.  In Clear the Decks! players are working together battling an enemy ship with their own navel ship and crew. Clear the Decks is designed by Christopher Pinyan of Crispy Games Co.

Clear the Decks! is a 1-4 player cooperative card game depicting ship to ship combat in the age of fighting sail. For ages 10 and up.

On the high seas, you have met your enemy. By yourself or with shipmates, you each have 3 gun crews using different ammunition, tactics, officers, and marines to attack the enemy ship’s guns, crew and structures. Can you smash enough leaks in the enemy ship before they have destroyed all of your cannons? It’s time to beat to quarters and Clear the Decks!

All the line art for the game is complete. We have a couple weeks’ worth of coloring still to do and will provide updates over the course of the campaign. Some of the stretch goal cards are already designed and just waiting for enough funding to include them in the game. We estimate that by end of August we will be ready to send to printer for production review.

The closest I would consider is Castle Panic. It is also cooperative (though there still is a “winner”), there is the concept of impending danger and you have to come up with certain combinations of card and location in order to attack your target. 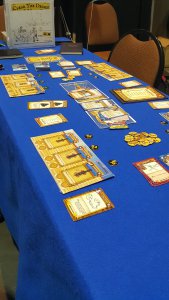 The movie Master and Commander was always a favorite. I got hooked on reading the book series, which then led to reading several non-fiction books on the US and British navies during the late 17 and early 1800’s. Reading through the sea battles, watching them in the Horatio Hornblower series on BBC made me of puzzle combinations – which cannon, which ammunition, which part of the ship, all the other issues to deal with during a battle and all of the different people on a ship – with different roles and how they all had to work together to be successful. That sounded like a great game to me. It had to be co-op and I didn’t want semi-co op where people are working together but ultimately still looking out for themselves to the possible detriment of the team. I love to see families sit down and work together, sometimes the parents coaching the kids, but plenty of times the kids getting excited and telling mom or dad what they should do. I loved the theme and it made designing now promoting the game fun. Sprinkling in a little history to maybe get people interested in reading up on the time period is a possible bonus.

Reading and taking notes on gun sizes, the different ammunition types and what they were used for. Lots of notes on the different parts of a ship. Reading about the different other things – good and bad – that might randomly happen during a battle lead me to create Event and Fortune cards. Tricks of combat became player tactics cards and of course – all the different people became Crew cards. Then allowing myself some creative license to be less restrictive on what combinations would be allowed to attack certain cards. Some mathematics to determine a good ratio of certain cards in the game (Round shot vs Chain shot for example). Then on to gameplay – lots of testing and making sure the tension remains to the end and putting in some resource management requirements – saving the right cards for the right part of the game, but keeping the temptation there to get the unwary to use them at the wrong time and jeopardize a victory. Wanting the game available as a solitaire, and for younger and older families generated the concept of different sizes and difficulties of the ship – making lots of opportunities for interesting play among different age groups.

Work together for a change! Show how teamwork and giving can help everyone succeed together. Can’t we ALL be happy and have fun on family game night? If we do – then maybe getting people interested in another family game night is easier. This is a way to get kids interested in this topic.  It may put them down the path to developing their own reading habit. This was not the original goal of the whole game process, but if happens to be an unintended side effect – great.

About 2 and a half years.  Around Feb 2015 when I started evolving the mechanics of an earlier game I was working on for 18 months previously into this one.

Number one is time! With a day job and two teenagers its tough to get even an hour of uninterrupted time to focus on something. On a personal level, getting outside the comfort zone.  First, to go out and show it to playtesters. Then take the feedback of something you worked so hard on – without taking offense. That is a real personal growth opportunity.

Blank cards I ordered online that I drew on with markers. On the back, I got a tall ship ink stamp from a scrapbooking friend and red and blue ink pads for the two card types.

I grew up playing games – at home, at the park during the summer. I discovered local game conventions and once the indie game craze started – I thought I could do it.

Clear the Decks is driven by theme, and the theme is driven by my passion for it. I worked in a lot of little details that I love to share during demos. I hope people will discover on their own as the play the game. Inspiring people to search for a couple of my references, maybe more people become interested in an amazing period and some amazing people in history.
You can learn more about Clear the Decks! by checking out my website www.crispygamesco.com
or by following me on Instagram and Facebook at Crispygamesco.

A Beginner’s Guide to Fortnite! How to Play the World’s Biggest Game!