Kickstarter of the Week: Penguin Slap

Penguin Slap! is an adorable game I played at the Boston Festival of Independent Games.  The game fully funded on Kickstarter with the campaign running until October 28, 2018.  It only costs $15, plus shipping, to get a copy of the game.

Penguin SLAP! It’s a take-that style card game for 2-4 players, ages 9 and up. Players need basic reading comprehension to play. My name is Rich, and I co-developed the game with my partner Jewlz.

In Penguin SLAP! each player assumes the role of a hungry penguin hoarding fish. There are lots of goofy penguins to choose from. There’s a secret agent penguin, an emperor penguin, a polar bear dressed as a penguin, an alien dressed as a penguin, and more! To win the game, you want to be the last penguin holding fish cards. You can make other players drop fish by slapping them with your fish cards (no physical slapping required.) But you’ve got to be careful, if your opponent has a “counter” fish, they can reverse your slap back to you! The game is casual enough to play with younger audiences while also having enough strategy to entertain more advanced players.

It’s live NOW until Oct. 28th. Check out the Kickstarter right here.  Where are you in production/development? How close are you to complete?The game is complete, except for any additions that we’ll add as a result of the kickstarter.

We tend to describe our game as “super” Uno but backwards. In Uno you want to run out of cards first, in Penguin SLAP! you want to be the last player with cards. Our game also gives players more strategic options, which gives players more control over their fate. Since fish cards are colored on both sides (each color doing something different) and each player has two draw piles, players choose which pile (and which color of fish) to draw. Penguin SLAP! also has an equipping mechanic which adds to the strategy. Green fish can be equipped in front of a player and later are used to augment other cards. We’ve also seen players get “Mario-Kart syndrome” with our game, where it no longer matters if they win or lose. They just want to get back at that one player that blue-shelled (or slapped) them earlier on.

We’ve played some longer, more strategy-intensive games and, while enjoyable, sometimes a player gets a clear lead and they can be hard to catch up to. We’ve also played shorter, more casual games and found that they lack the depth that makes them interesting beyond the first few play-throughs. So we wanted something short and fun that had enough strategy to be interesting, with enough balance so that players who get a strong lead can get reeled in quickly and players that lag behind have a chance to catch up (If you run out of cards you can draw back in on your next turn.)

Penguin SLAP! games generally end very close, often the winning player wins by a single card. Each time you play you can choose a different penguin persona card to represent you, which will give you different abilities and influence your strategy. Games feel engaging and since they’re short, it’s easy to replay again and again, trying different personas. Besides, who doesn’t like penguins? 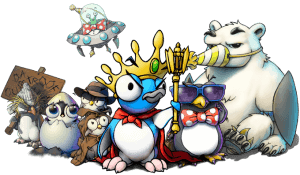 We started out with cut up sheets of computer paper. To color our fish we colored the backs of the paper with highlighter. (We couldn’t find any markers, but we had 4 different colors of highlighter. At first the cards were simple and said “+1 fish” or “+2 fish” or “-2 fish.” Once the mechanics were solid we brainstormed the penguin narrative. We’ve been playtesting for over two years now at game cafes and in Boston as members of the Boston Game Makers Guild. (Shameless plug! If you’re designing a game I HIGHLY recommend finding a Meet-up group of game designers to play with. You get GREAT feedback.) Jewlz does all the art for the game. Her amazing art is all over our YouTube page (our username is “Penguin SLAP!” Check out her speedpaints here!)

Penguin SLAP! aims to be entertaining and engaging from start to finish. Our game doesn’t implement any player-elimination (at least, until the very end when someone wins) and younger players seem to love the goofy story (Only penguins live on Tuxedo Island, so to get in on the prime fishing area other animals disguise themselves to blend in. All the penguins fall for the disguises except this crazy-haired conspiracy theorist penguin who wears a tin-foil hat.) The game is playable casually with kids or more aggressively with older players. The gameplay is short enough and dynamic enough that it can be played as a starter game before a longer game night, or repeatedly throughout the game night.

Two and a half wonderful years.

This is tricky. Game-mechanics-wise there were a few, but designing those out is part of the fun of game design! Finding a company that affordably prints on nice cards without the image drifting too much has been a challenge. 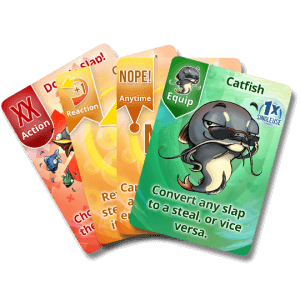 Cut up sheets of white printer paper with pencil on one side and highlighter on the other.

We like creating things! For our main jobs Jewlz and I do visual effects for film (Look up Rich Hardy Jr. and Julianne Holzschuh on IMDb to find us!) Jewlz is an also an AMAZING artist and I do programming, so we were going to create a video game together, but I figured a card game would be easier to prototype and would help us understand game design better before we jumped into the deep end.

We’ve got more info on our Kickstarter page, which is live NOW!  We’re adding in extra penguins and art to the game right now, thanks to our AWESOME backers! We’re listening to the community as much as possible and we’re trying to respond to every comment we get.

We have a website at penguinslap.com. On our website you can read about the penguins in our game and you can download free puzzle pages and coloring pages. (Our puzzle page is a “publication” from Tuxedo Island called “The Tuxedo Telegraph.” It’s like the newspaper that the penguins read. We also have an email list that we occasionally give things away on, you can subscribe here if you’re interested.

Our YouTube channel is full of videos of Jewlz painting the artwork from our game. It’s mesmerizing to watch, and easy to get lost in.