Rudy Games has announced “Interaction” a new party game that, in concert with an interactive app, will help end the problem of the “age gap” in quiz/party games.

We’ve all been in all-ages groups where everyone has wanted to play a game together. We’ve also dealt with trivia games where everyone at a table has a different area of expertise or interest. Interaction is a game designed to help end those problems and put every player to the test whether they are a science focused nerd or a sports geek. The trick is that Interaction is designed to be played using an interactive app that will learn everyone’s interests based on previous answers. The game will event connect to Facebook accounts (as an option) to help create the perfect game. 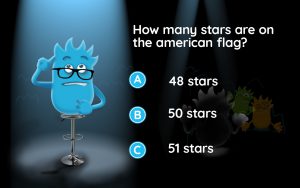 I imagine this app to work like Pandora. The more often a player plays the game the more tailored to their interests the questions will become. That is definitely a unique concept that will help solve another problem with most trivia based party games: replayability. Games eventually run stale after lots of play. This is especially true of quiz games. Interaction is different because is a game that can continuously feed new content to thanks to updates from the developer.

This adaptability also solves an additional problem that is common with trivia games. Many of those types of games have no real way to manage difficulty. This means that some games will be a piece of cake and others will be super challenging. The fact that the game knows what people have answered in the past should help tailor the questions. This keeps everyone on the same playing field. Keep in mind too that a lot of questions in these types of games are only testing one person and it doesn’t matter if everyone else knows the answer. This means that the game could ask simpler questions of someone who is younger or less versed on a topic and keep the game even in challenge level with an expert.

Interaction is being funded through a Kickstarter which has gone live today. I definitely recommend that everyone take a look at it to see if you are interested. It certainly looks like it could be a lot of fun.