You are a nomadic, prehistoric people. Your tribe prospers by growing in population, moving across a variety of lands, gathering resources, and by having a strong leader. Be the first to victory by scoring 15 points! Will your tribe rise above the rest? 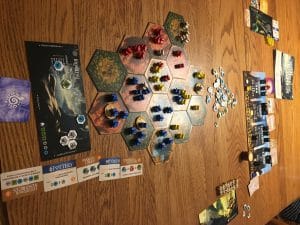 Rise of Tribes is a much anticipated game designed by Brad Brooks (creator of Letter Tycoon) that will be available as a Kickstarter on June 6, 2017. The artwork and component design is striking and extremely dialed in to the overall theme of the game. While this game uses some familiar mechanics such as resource gathering, dice rolls to determine actions, and quest completion, it puts them together with a unique twist that makes the game simple to play while adding some advanced strategy and technique for experienced gamers to really sink their teeth into.

The artwork on the box, the player boards, and  the rules booklet all help to evoke the tribal feel of the game. The cards and dice are of high quality and the cardboard components are of higher quality than most board games. The Kickstarter promises a Deluxe Edition with wooden components that definitely seem worth paying a bit extra for to really keep players immersed in the theme.

The object of game is simple – be the first Tribe to score 15 Victory Points. At first the rules and mechanics look intimidating, but if you dive in and play through a turn or two the mechanics become much easier to understand and play starts to move very quickly and competitively.

After laying out the hex grid for the terrain and setting up the Action Board and dice according to the rules booklet, the players put meeples on the board to start the game based on turn order.

The first player rolls 2 dice and then chooses where to put them on the action board. The player must take 2 actions on their turn (each action must be different). The player can choose to GROW their Tribe, MOVE their Tribe members, GATHER resources, or LEAD their Tribe. GROW allows the player to add more tribe members to the board. MOVE allows you to expand your tribe to more hexes and different terrains. GATHER helps the player get resources to build villages or complete goals. LEAD allows a player to get goals to complete which give the player additional Victory Points and some fun benefits.

When they player rolls their dice and chooses an action, they add the first of their die rolled to the first die slot of an Action, pushing all the other dice along to the right. The end die gets placed on the bottom of the Action Board and will be rolled on the next turn. The result of the 3 dice on the top of the Action Board determines the power of the action chosen. This mechanic adds quite a bit of strategy to the gameplay and adds the ability to influence future turns for opponents. This helps balance the fact that your initial actions are determined by chance dice rolls. Once the first Action is fully completed, the player follows the same steps for their second Action. The dice also have another function. If doubles are rolled, a game wide Event is triggered. These Events become active immediately and get resolved by following the directions on the card. Events cards resolve at different paces and can change play positively or negatively depending on the directions.

After the Actions or any Events are completed, Conflicts get resolved. Conflicts occur when more than 5 tribe members occupy a hex. Villagers are removed until only one Tribe occupies the hex. After Conflict gets resolved, players can Build villages or reach Goals.

Is it a Family Game?

Because the game has so many different mechanics to work with, we think the age of 10+ is accurate. A savvy gamer of a younger age may be able to play with some adult coaching. There is also reading involved in the Event Cards and the Goal Cards, so that also adds to the minimum age that a player must be.

This is a light game that requires strategic thinking, planning and forethought, as well as some advanced logic and critical thinking skills. Players really need to have the ability to make independent decisions and the ability to understand long term consequences. Our adult players found both the theme of the game and the actual gameplay enjoyable. They loved the fact that there were so many different ways to achieve the objective of the game.

The first few turns we played through moved fairly slowly, but as we continued, meeples and villages quickly filled up the board and players became much more aggressive, searching out conflict and rushing to pick up Lead cards. The more we played through the game, the more we saw that there were many different strategies to get to 15 points.

We were super impressed with the thoughtfulness that went into game balance. All of our games were close matches and the dice movement mechanic really required players to think a few steps ahead. This game was extremely playable by players of all types. Our 11 year old quickly taught his friends and they each jumped in with their own style of play. Our experienced players found that the pace of the game kept everyone involved until the end of the game. You couldn’t predict who would win, because the score could change drastically in one turn.

We really loved the fact that this game can be customized to play at a more advanced level with the Leader Power Cards once players have gotten the basic game strategy down pat. We also see many expansion possibilities for the future in this game (5-6 players, perhaps)!

Overall, it’s a tightly designed game with a beautiful theme that uses familiar mechanics in a unique way that really allows players to tailor their strategy and use their own personal style to achieve victory and rise above the rest! Replayability is high, and it is more than worth the MSRP.

FCC disclosure: A copy of this game was sent to us by the publisher for the purposes of this review.

Gaming With the Moms Episode 100: Celebrating Gaming with Our Kids

I loved playing this game!