Rage of the Trolls is a standalone expansion to the Gruff game system coming to Kickstarter on 05/30/2017.

Gruff is a tactical card game that has been around for a few years now. The game puts an interesting spin on the Billy Goats Gruff bedtime story. If you recall the three Billy Goats Gruff used their wits to outsmart an evil troll so they could cross a bridge. In the game’s universe this victory was noticed by the shepherds nearby. They decided that they would use selective breeding, magic, and technology to help turn the goats into an army of … very weird soldiers. 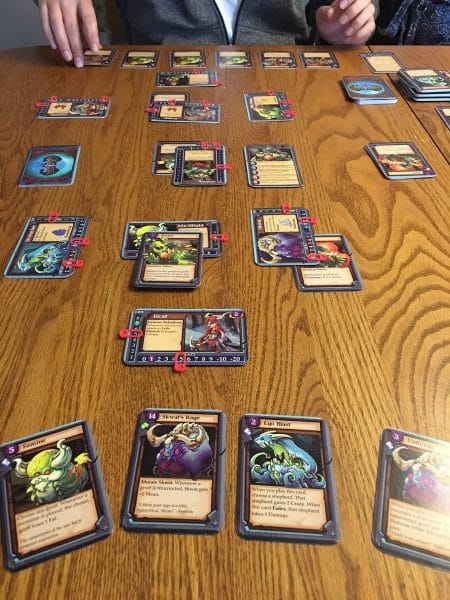 Gruff: Rage of the Trolls expands on the franchise by giving players a chance to cooperate against monstrous trolls for the first time. The mechanics themselves are simple. Players set everything up as normal and place the troll in between the two players. The troll acts using behavior cards that are drawn and played during each player’s turn. Each card has a series of actions and effects that are triggered based on the trolls “rage” stat.

The troll’s rage stat increases on each players turn and this has an impact on the damage it deals and the number of actions on its behavior card that it will take. The troll gets very dangerous quickly during each game as its rage meter increases. Players who aren’t careful will have their gruffs taken out quickly.

These mechanics do make for an interesting cooperative experience. Our playtesting team felt challenged and encouraged to really study their shepherds, gruffs, and cards to make sure they were playing with optimal strategies. Its a great feeling to be forced to make adjustments between games like this because the thrill of victory is a great payoff for experimentation.

With all that said, the troll mechanics were a bit difficult to follow because they added several steps to each round ,compared to the main Gruff games, that kept our team from ever really feeling comfortable. This wasn’t enough to keep us from playing, but it was frustrating until we were able to get the rhythm straight.

While I don’t think there is anything in particular about the game that is questionable, I do encourage parents to take a look at the art for the game. The battle goats are beautifully drawn, but they are definitely weird. Parents will know if a particular character would be problematic. The only time I would imagine this to be the case is if your child has an odd or unexpected phobia. These critters are definitely dark, but they are not gory,

There is nothing in this game, outside of maybe the artwork, that is any more objectionable than Magic: The Gathering or Yu Gi Oh. Your family can play this game with confidence.

Rage of the Trolls is slightly more complicated than the base game. The addition of the troll “boss monsters” add several different steps to each turn that made it harder for out play testers to keep track of things. This added complexity could have a negative impact on the experience for some younger players.

We may have had our difficulties with the cooperative aspects of the game, but this is a must own expansion for fans of the Gruff series. It includes two new Shepherds and six new battle goats that are fully compatible with the rest of the Gruff games.