Scream or Die is a 2 to 8 player game by Amber Palace Games designed for players ages 8 and up. The game takes between 15 to 20 minutes to play and is very simple to learn and explain. It is currently on Kickstarter with a modest funding goal. We’re happy to report that this is a pretty good game that will be a cute addition to your family’s game collection.

The base game box comes with:

You play as a tiny monster that has been transformed into a child by your boss (who happens to be an evil witch). The only way to break the spell and get returned to normal is to be the first monster to bring her thirteen Halloween candies. 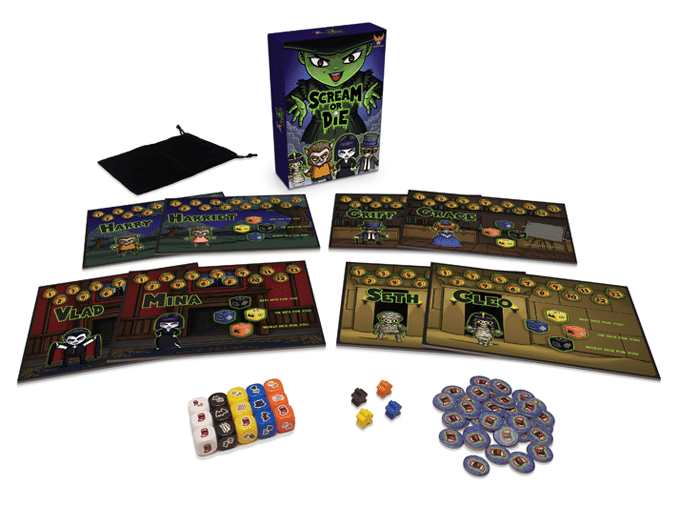 Each round of Scream or Die consists of three phases- Before the Roll, After the Roll, and Scoring.

The roller removes five random dice from the bag to make a dice pool. Starting with the player to the left of the roller, each player takes turns using their scream tokens to add dice to the pool. They do this by paying the token which forces the roller to pull another die blindly out of the bag.

Each player gets a chance to re-roll dice of their choice. Just as before, starting with a player to the left of the roller, all players take turns using scream tokens to make the roller re-roll dice.

Each player gets one candy for each of the monster symbols of theirs that is showing at the end of the round. Players keep track of their candy using the score tracker on their monster mat.

Players continue to play rounds until one person gets thirteen or more pieces of candy.

The game is quick to play, and the push your luck mechanics and dice influencing strategy make it much more fun than a basic dice rolling game. We love the fact that you can play with up to eight players! Our playtesters enjoyed that they were never bored because they had an action to take on every roll.

Another thing we love about Scream or Die is how great it is as a teaching tool. This is a great game for teaching the concept of resource management. It’s very easy to go through scream tokens in the hopes of adding dice that are favorable to you. But, you have to make sure that you are aware of what other players are doing so that they don’t take the lead too quickly. Some of our players forgot to save up some scream tokens to re-roll symbols that were helpful to their opponents towards the end of the game. They were VERY aware of the mistakes they made as they watched their friends rack up the points and win.

The rules include some fun variants for team play and dice drafting to keep things interesting. There is also a simpler family variant that makes scream tokens a little more fair.

Overall, this is a terrific party game, filler game, or introductory game for non hardcore gamers. You can back this game with confidence. We think your family will enjoy this one!

Hasbro and Mensa Team Up To Use Classic Family Board Games in Free Lesson Plans!