It is always great to visit Gamewright at New York Toy Fair. Last year they showed us games like Dragonwood, Flashlights and Fireflies, and Outfoxed which ended up being a lot of fun. This year they showed us a whole pile of games that looked like they had some great potential. Take a look below for some details.

Bring Your Own Book 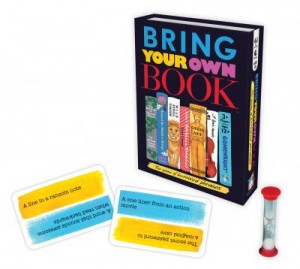 Imagine a party game where each player takes a turn (or multiple turns) as a judge while other people offer up humorous answers to a randomly selected question. Ok. Got one? Got more than one? Got twenty? Don’t laugh. This style of games is turning out to be ubiquitous in the board game industry over the last handful of years. Cards against Humanity really blew the doors off and everyone else is rushing to catch up.

The mechanics match Apples to Apples and Cards Against Humanity almost to the letter. The difference is that instead of a deck of random cards each player is expected to bring their own book. This could be everything from a children’s book to a romance novel. The judge chooses a subject like “Unpublished Stephen King Novels” and the rest of the players have to flip through their book and find a passage that best represents that topic. The judge picks the winner and the game continues.

The fact that it involves books will make this game appeal to book nerds right off the bat. But, the fact that players provide their own books means that this game will change based on the audience and the books they bring. This limits the two main problems that some people have with games like this: repetition and, in the case of Cards Against Humanity, inherent offensiveness. 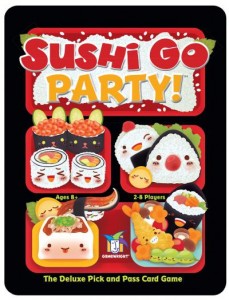 Sushi Go is one of our favorite games. It’s hard to beat a game that is interesting, cheap, and all but infinitely replayable. Gamewright looks like they pulled it off.

It comes in a bigger tin that shows off more cute sushi rolls, but the main gameplay difference is that players spend the first bit of gameplay choosing which cards to include in the deck that everyone drafts. There is no established rule in the book for determining which cards are selected either. They expect that players will come up with their own interesting methods. 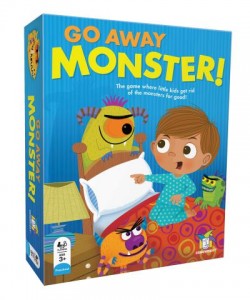 This is a rerelease of a game for the younger set with new art and prettier components. The main thrust of the game is that you have to fill up your card with different puzzle pieces to make up a child’s bedroom. You do that by reaching into a blind back and feeling around for the piece that you need.

The trick is that there are monsters in the bag and if you pick one out of the bag then you lose your turn. 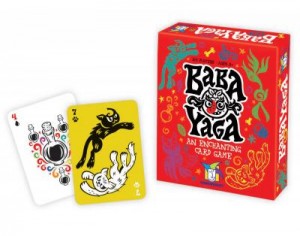 This is a rare game where the game designer and the artist are the same person! Baba Yaga is a gorgeously drawn card game where players attempt to rid their hand of the highest value cards and pick up Baba Yaga cards that are worth 0. The goal is to have the LOWEST score possible.It’s a fast paced game that will really get your kids thinking.

The below games aren’t on the Gamewright website yet, but we were able to put some pictures up on Instagram.

The Cardventures series of games is a group of card based, single player, choose your own adventure games. The first two games in the series are Stowaway 52 (a space adventure) and Jump Ship (a pirate themed adventure).

They are marketed as a single player experience, but I really think there is an option for a collaborative experience. Groups of players could read through the cards and discuss the decisions that the characters make and negotiate what to do. There is a lot of learning to be had in that experience.

I’ll be blunt here. Skywampus is a tough game to describe. Players are given piles of diamond shaped tiles and race to fit them all together to complete circles using the numbered and colored sections at their corners. The goal is to complete challenges that are listed on poker chip type markers to earn points.

It is super fast to play and requires quick thinking and flexibility, but if you and your family have ever thought about competitive puzzling (is that even a word?) then this is going to be a good game.