The sound of hurried footfalls on pavement echoed through the alley way.  Three young girls stop fast, as they reach momentary safety, their eyes meet. With one decisive nod, three voices call out in harmonic unison.  As the words float through the air, perfectly cut crystals hung from cords around their necks radiate light. The surrounding atmosphere begins to crackle with pure energy, enshrouding the girls within it’s ribbon-like currents of translucent, opalescent color.  The winds die back down leaving three new girls, clothed in colorful and silken suits, brandishing impossible armaments standing in the spaces once occupied by the rushing girls.  Echos of boots on cobblestone ring in their well adorned ears, as their equally saccharin rivals flowing pink ribbons come into view.  Only one team can keep their transformation crystals. Who will win? Only magic… and maybe the moon… will tell!

In Japanese, the term Mahou Shojo means “Magical Girl”.  If you’re not sure what a magical girl is, you only need to look as far as Sailor Moon or RWBY to find one.  They are young women who have an innate (or given) power to become a more powerful version of themselves, basically a magically endowed superhero set to fight evil for her ultimate cause!

Mahou Shojo is a card game that pits two teams of magical girls against each other in an attempt to prevent the other team from transforming! There are two starter sets to begin, each with two decks of very different sets of girls.  Players begin the game by selecting three alter egos and then drawing four more cards.  The game starts with an alter ego phase, where players can play an alter ego card as well as a magical girl card face-down.  Since a magical girl never looks like her alter ego (secret identity and all), any magical girl can result from any alter ego.

Magical girls have three stats, Health (HP), Attack (ATK) and Magic (MGK), which add to the base stats of their Alter Egos (who only seem to have HP and ATK).  When the girls transform, the resulting cards form a plus sign to help remember that those cards stats and abilities stack. 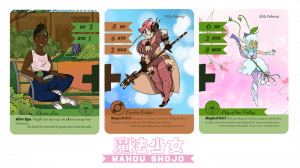 A turn consists of four Phases – Draw, Action, Attack, End. Actions are selected from the following list: Summon, Spell, Retreat. Summon either brings a familiar into play or transforms your alter ego into a magical girl. Spells consist of Special Events and Special Attacks, these cost magic and augment your abilities.  Special Events can be played during your turn, or they can be played to stop your opponents at any time.  During the Retreat phase you may summon a single face-down alter ego or bring a different transformed hero forward to the main position to relieve your current leader.

When a magical girl is defeated, she, and her alter ego retreat to an alternate dimension and are no longer able to be played, and her opponent gains her transformation crystal. If a magical girl uses all of her magical energy, she will revert back to her alter ego, if she is defeated in this form, her opponent receives half of her transformation crystal.

Mahou Shojo plays like a CCG (Collectible card game), but with pre-constructed decks, it bypasses the initial and on-going investment needed to play such games.

Game play is quick and relatively simple for an adult, though for younger children it might be a little complex.  The recommended age is eight, however there is a lot of text and a large number of differing mechanics that might make it more difficult to navigate.  This could have been simplified by using icons for the main stats and by clarifying some of the language on the cards.

The game is still in development, so much of my criticism has to do with how it is currently structured. However, the developers are very interested in play-testing and making changes to polish the game.  The rules are in need some cleaning up and finalizing, and the language needs to be made more consistent, however the concept is solid and has a lot of potential.

Artwork in this game is fantastic, the characters are super inclusive of all kinds of women from their varied skin tones to their body types.  There is better representation of females in this game than I’ve seen in any game before it. That in itself makes this a fantastic game to empower players to find their own representative character and to help every girl find her magic.

Mahou Shojo is currently on Kickstarter, with a starter set of two decks priced at $20.  The campaign ends April 8, 2015!

Osmo Masterpiece is Here to Make Your Child an Artist!