A few weeks back, Flagship Comics and Games in Southington, CT closed after being in operation for a number of years. I spent a lot of time playing in Friday Night Magic tournaments there and I wanted to help celebrate with them as they ended their run.

As the weeks ran down to the event Evan chimed in and told me that he would like to play. I, honestly, hadn’t thought that he would have any interest in card tournaments yet, but who was I to question him? We set out immediately to build him a deck worthy of a true champion and started practicing every night in order to get ready.

The day finally came and I decided to forgo playing in the tournament myself in order to get a chance to watch him play and record it for posterity. I figured… I have a website, so why not take advantage.

He decided that he wanted to play with humans, so we build him a green/white deck that followed the template of decks online (more or less). He practiced with it a bunch, and was feeling very comfortable with it by the time FNM came around.

I’m going to try my hand at writing this up like a tournament report that the Magic Pros write. If for nothing else it should be entertaining to write. Here’s hoping it is also interesting to read. 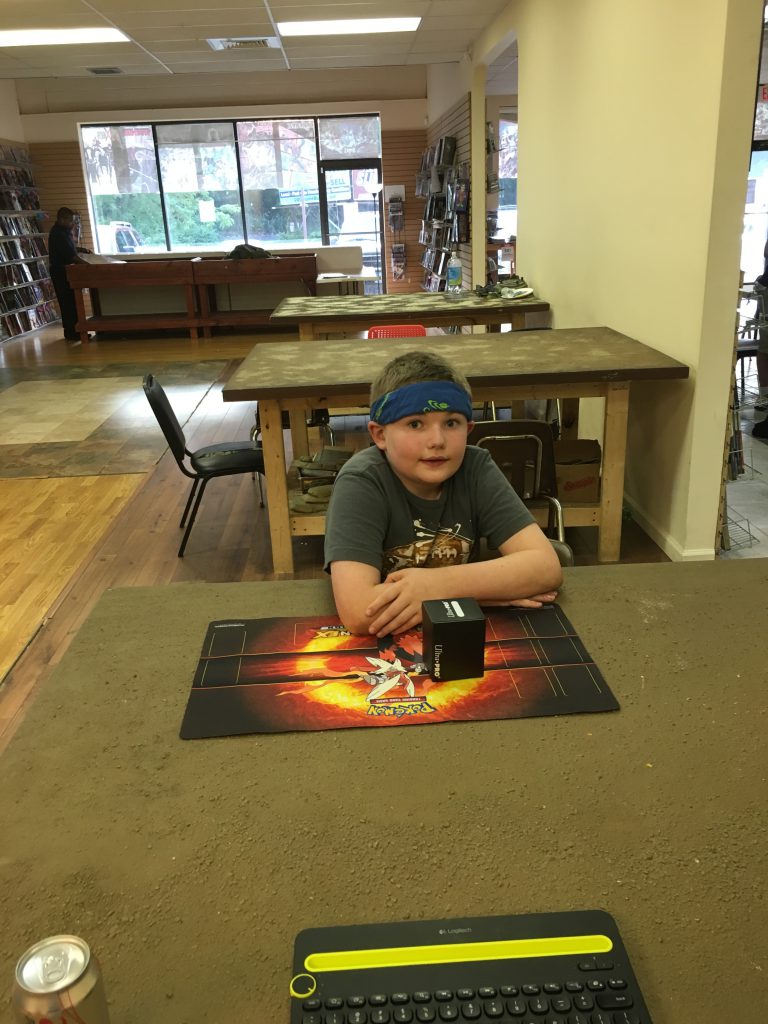 If we’re being honest with ourselves, this isn’t the best deck out there., but it was built based on what we had and Evan loved it.

He almost got a bye for the first round, but the tournament organizer reset everything to make sure he played. Evan was actually a little bummed because he knew a bye would help him, but he soldiered on.

This was neat because Evan’s first opponent was a younger kid who was  very excited to be playing. Evan lost, but he wasn’t intimidated or frustrated.

Evan opened very strong with a pair of Dragon hunters in game one. But, his opponent responded very quickly with several allies that drained his life quickly and eliminated his life lead. It was all over after that. Evan learned pretty quickly that swinging into a crowded board is dangerous. He DID have a very good play where he Stasis Snared a seemingly random critter on his opponents turn in order to be able to use declaration in Stone the next turn and exile two of his opponents creatures on the next turn.

Game two Evan elected to draw which was an odd play for sure. An early Drana, Liberator of Malakir was game over really fast.

His opponent here was a younger guy in his twenties. I’m honestly so sure about his age to be honest, but he was vaping so he definitely wasn’t a kid. This player was nice enough, but he didn’t really interact with Evan at all. I got the feeling initially that Evan was a little intimidated, but he just played the game as I expected him to.

A few combat misplays hurt Evan during game one after he got out to a blistering lead. Bottom line? Trample is a very strong effect when played against creatures with very little toughness.

The same thing happened during the second round.

Evan and I had a little coaching session afterwards where I talked about how he needed to be more aware of both his cards and his opponent’s cards.

HIs opponent was a very nice older guy who was there with his son. He was exactly the kind of player I was hoping my son would go up against because he was patient, and took the time to explain the effects of whatever he was doing to my son. This was a tough match for Evan, but I think he learned the most out of all of his games here because his opponent was playing a lot of creatures that were of similar size.

Evan won his first game here on the back of a very fast creature rush. His opponent couldn’t keep up and conceded early.

His second game didn’t go nearly as well because of a lack of white mana. His opponent, on the other hand, had no such problem.

They went to game three which ended up being a slugfest that lasted a very long time. Evan had to make a lot of really hard decisions in combat like who to block and what to attack. He made most of his decisions correctly, but eventually he swing his only two humans into an impenetrable wall and gave his opponent the win.

He was, unfortunately, the only person with an 0-3 record so the computer sat him with the bye. He was ok with it though, because it gave him a chance to sit back and watch how the other games were played and look at some cards.

He didn’t do well enough to earn any prizes at the end, but he was thrilled to have participated. The whole ride home he was talking about building decks and when he could go to another Friday Night Magic.

We both learned a lot from the experience.

He learned about the value of friendly competition. He learned how to keep a cool head, even when he was losing, and just enjoy playing the game. I was very proud of the fact that he didn’t look beaten down even after being so badly beaten on.

The lesson I learned that night was pretty simple. Tournaments, especially Friday Night Magic, is a great place to help build excitement for a game like Magic. Everyone wants to be there and is excited to get a chance to play. This excitement can be felt throughout the room as rounds start and people get to their seats. It can’t help but infect anxious players and get them amped up to play again.

If you want to bring your family to an event like this go here to help locate a card shop near you that holds them! 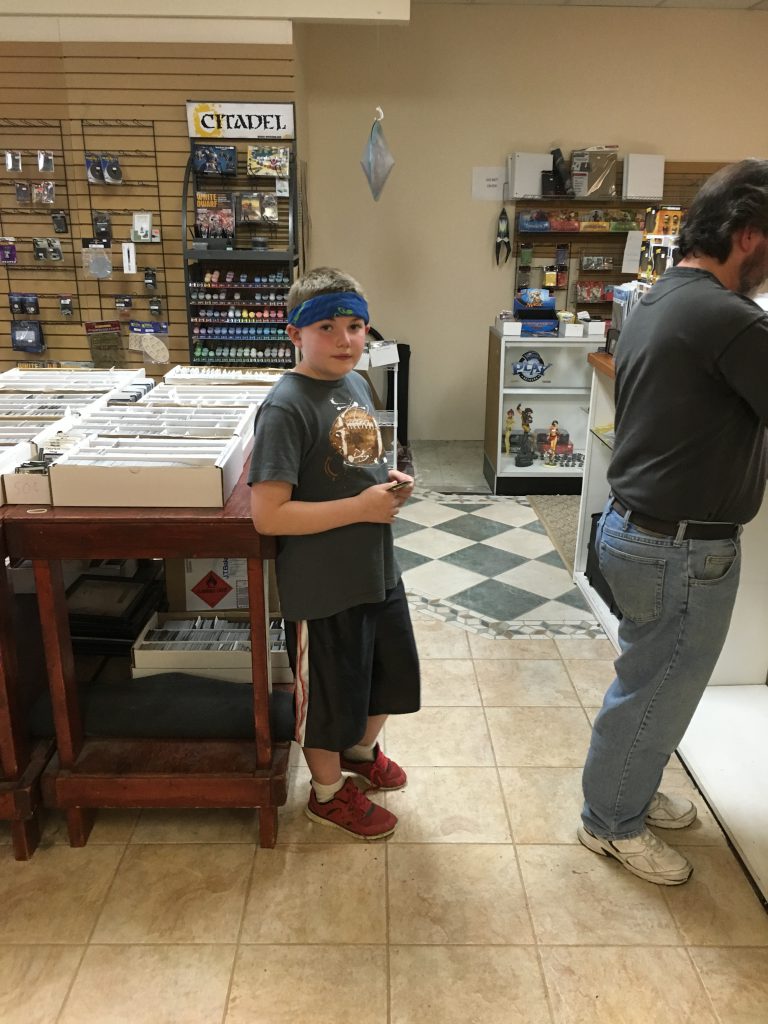 Tired at the end of it all!

Why I Let My Kids Play Overwatch and HALO

What is No Man’s Sky Anyways?

Makes me consider slinging spells after more than 20 years away.