It’s that time of year again. Finding great gifts for people can be tough. Here are some of our Nintendo recommendations for the kids in your life!

The 8th generation of Pokemon is upon us! Pokemon Sword and Shield will be the perfect gifts for the Pokemon fans in your family. These games can easily provide a hundred or more hours of entertainment, and these newer games will likely include even more! Sword and Shield are the first Pokemon games released on a home Nintendo console so they look great, but, as always, they are right at home on the go.

Super Mario Maker 2 is one of the best creative tools for young and adult gamers alike. This game lets you create Super Mario Levels from across the history of Nintendo, with a well made tutorial that offers plenty of new ideas. Players can browse player made content by individual creator or in an endless mode that select levels based on difficulty. Super Mario Maker 2 is easily the best level creation experience for the Nintendo Switch.

The Legend of Zelda: Link’s Awakening

The Legend of Zelda: Link’s Awakening is a shot for shot remake of a game (by the same name) that was released on the Game Boy Color in 1993. This version released in September with an adorable new art style and an orchestral soundtrack. This is a perfect gift for Zelda fans that are too young to have played the original AND for those of us looking for a chance to relive our glory days.

If your child spent hours arranging all of their Imaginext toys in massive battles, then Fire Emblem is worth a look. Fire Emblem: Three Houses is a strategy game set in a sword and sorcery themed academy for heroes. (It’s not exactly Hogwarts for Dungeons and Dragons characters, but it’s pretty close.) Battles play out on massive fields where you move your different characters around strategically to take advantage of enemy weaknesses. This is a challenging game, and the characters are teenagers (so they come with the appropriate thematic baggage), but it ends up as a T-rated game.

Steamworld Quest: The Hand of Gilgamech

All of the Steamworld games are amazing, but this is easily one of my favorites. Steamworld Quest is a friendly RPG where you control a team of robots during a fantasy/steampunk era.  The combat is card-based. You build a 24 card deck using a card pool determined by which robots are in your party. Every fight turns into a puzzle that is very satisfying to solve. The story is also relatively short so this will be a great game for Holiday break!

It’s tough to find a kid that doesn’t love Marvel super heroes and Ultimate Alliance 3 has a TON of them. Ultimate Alliance 3 is a celebration of recent Marvel history that has a character just about every kid will enjoy. MUA3 is a paint by numbers action RPG for up to four players. It doesn’t do anything revolutionary, but it doesn’t really need to in order to be a great gift.

Every year I get asked about video game gifts for younger gamers. Yoshi’s Crafted World is this year’s answer to that question. It’s adorable. It’s simple to control. And it’s engaging. This will be a great game to share with the younger siblings/cousins who might not be ready for bigger challenges just yet. 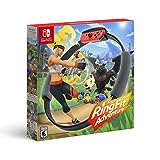 Nintendo has made fitness games before. Wii Fit (and the Wii Fit Balance board) where huge hits back when they came out. Ring Fit Adventure is their latest attempt to break into that scene on the Nintendo Switch. Ring Fit Adventure is an RPG adventure where you move around the world by running in place, and attack monsters by completing exercises using a specially designed pilates band. The story isn’t anything to write home about, but its good enough to help motivate players to complete a short workout every day.

(Honk)… A PC game that charmed the Internet with its simplicity, Untitled Goose Game is best described (without spoilers) as an environmental puzzle game. You are a goose, with the mind of mischief and the talents of a… goose. You have a list of things to do, and no idea how to do them. Our advice is to pick it up on Steam as a gift for the holidays and enjoy the mayhem. 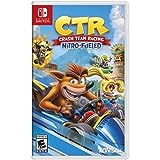 Crash Team Racing: Nitro Fueled is a painstakingly crafted remaster of several Crash Team Racing games that were released on PS1 and PS2. This is a challenging cart racer that will be a big hit with fans of Mario Kart 8 that are looking for more challenge. This a feature rich remaster with 31 tracks, numerous cosmetic items, and a full-fledged story mode. It’s definitely worth looking into for your family.

Luigi doesn’t get the spotlight very often. That honor is normally reserved for his brother Mario. The Luigi’s Mansion series is the exception. These spooky adventures feature Luigi while he tries to rescue his lost brother from King Boo. Luigi’s Mansion 3 is out now for the Switch and includes a lot more variety in the environments because it takes place in a massive haunted hotel. This will be a great game for kids who love to explore and solve puzzles. (Note: This game is definitely more silly than it is spooky so don’t be super concerned about kids getting scared.)