Top Posts
8 Games From Essen Spiel 2022 That We’re...
11 Board Games That Help Teach History!
How to Play “Frustration” – an EFG Family...
Family Board Game Review: Fyra
Tips for Completing Jigsaw Puzzles
Step By Step How to Play Roller Coaster...
Board Game Definition of the Week: Trick-Taking Games
Family Board Game Review: Kingdomino
Board Game Definition of the Week: Meeple
Building Sportsmanship with Board Games
Home » Skylanders will “Light It Up Blue” For Autism Awareness Month
News Updates

Activision Blizzard is teaming up with the charity Autism Speaks as part of the “Light it up Blue” campaign. They will be releasing a set of special edition action figures that are painted blue in an effort to raise awareness for Autism ahead of Autism Awareness Month this April.

The figures they are releasing are Splat and her boat, Splatter Splasher, as well as Trigger Happy and his car, Gold Rusher. 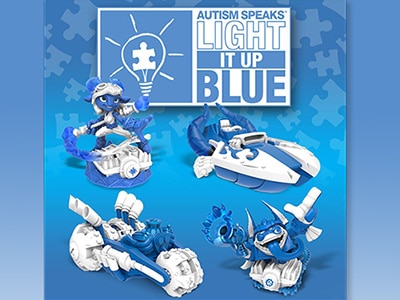 These Skylanders Special Figures will Light it Up Blue! (available now!)

These special figures will function identically to their regular counterparts, but they will appear blue and white inside the game as well.

The Power Blue Toys aren’t the only way that Activision is supporting Autism awareness either. They are:

This is a great program for Activision to get involved in as Autism is a concern for millions of parents all over the world.

What do you think? Will you be buying any of these figures? Sound off in the comments!

New York Toy Fair: Roxs by A-Champs Are Coming to Get Your Kids Moving!