Electronic Arts held their EA Play event today as part of the E3 2016 event in LA. They made a series of announcements regarding games like Titanfall 2,  Battlefield I, and Mass Effect. They also made an announcement regarding a significant addition to FIFA 2017.

FIFA is one of the most successful video games in the world; fueled by the massive popularity of football worldwide. The series began back in 1993 on the Super Nintendo and Sega Genesis and has grown by orders of magnitude since then. The newest game looks better than ever, but includes new features that just might make it bigger than ever.

Some of the technical updates are as follows:

Physical Play Overhaul – “U.S. Patent-Pending Pushback Technology changes the way players physically interact in every situation and introduces a new shielding system that gives fans more control when in possession or battling to win the ball.”

Active Intelligence System – “A brand new intelligence system gives players the ability to better define and classify space to make smarter decisions off the ball. Players will utilize several New Run Types like fake, direct, and stunted runs to stay even more active off the ball.”

New Attacking Techniques – “New options in attack give fans more ways to create chances and finish in front of goal. Send teammates in with a Threaded Through Pass and put exciting goals away with a Driven Finish or Downward Header.” 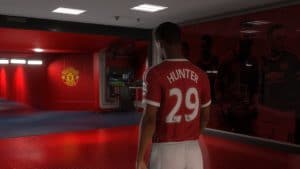 Those are excellent technical updates that fall well in line with previous iterative updates as the franchise has grown in the past. The most significant change, though, is the inclusion of “The Journey.” This is a game mode where players take on the role of Alex Hunter as he is drafted into the Premier league and begins his professional football career. Players will be in command as he plays games, makes plays, and deals with the trials and tribulations of his newfound success, wealth, and fame.

This appears to be a football themed take on the story of Frequency Vibrations in NBA 2016 and I am 100% ok with that. We will find out more details as the game gets closer to launch to keep your eyes on Engaged Family Gaming for more information about FIFA 2017 and the Journey.