Top Posts
Family Game Preview: Château
Gaming Definition of the Week: Analysis Paralysis
Tips for Playing Dungeons and Dragons with Kids!
How to Play “Frustration” – an EFG Family...
Great Games to Make You Laugh
Raising a Chess Prodigy: Tips and Tricks for...
EFG Essentials: Great Board Games for Kids
8 Games From Essen Spiel 2022 That We’re...
11 Board Games That Help Teach History!
Family Board Game Review: Fyra
Home » Ten Family Friendly Games from GenCon 2015 That You Have to See!
Board GamesNews Updates

Ten Family Friendly Games from GenCon 2015 That You Have to See!

GenCon 2015 is happening as we speak and board game publishers and independent designers alike are spread out across the show floor demoing some very exciting games. Below is a list of some of the more exciting family friendly games being shown.

Mice and Mystics is am amazing cooperative gaming experience. Plaid Hat Games knows that they have a great game world on their hands and are in the process of developing a miniatures based war game in the Mice and Mystics universe called Tail Feathers.  It is, without question, our most anticipated game of the near future.

We are huge fans of Dixit here at Engaged Family Gaming. Mysterium is a game that shares some similarities in that the game is driven by people’s empathy and understanding the potential meaning behind a given image. The difference is that Mysterium has a specific end goal. Players are each psychic mediums who are attempting to solve a murder with the help of a spirit who is sending them dream images to communicate who the killer was, where it took place, and what the murder weapon was (Sound familiar?)

This will likely be a bit difficult for younger players, but will be  a great game to have around as your family gets older

This game shares a lot theme-wise with 7 Wonders. The difference is that instead of drafting cards from a hand that you pass from player to player you draft your cards from a pattern of cards placed face down and face up on the table between you. Also, as the name suggests this is a game intended for two players.

Two players games can be difficult for families as they often don’t allow for highly varied skill sets, but it is hard to ignore the pedigree. Stay tuned for more info as release comes closer. 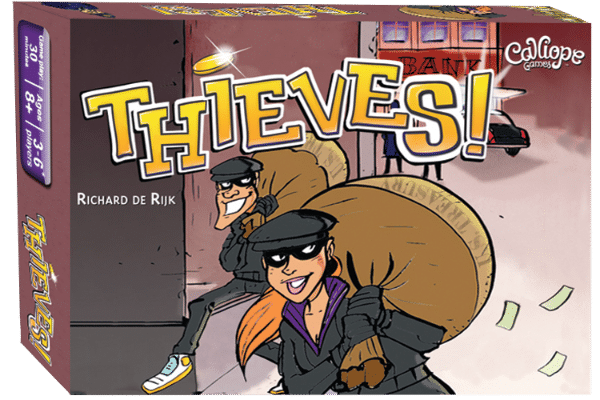 We posted about this one the other day when it was announced. Thieves was originally published in Europe but it is finally making its way to the US. Calliope Games does a great job of picking amazing games to publish so we are looking forward to getting our hands on this one.

Maybe we jump have summer camp on the brain since our oldest just came back from one, but this looks like a very fun little game.

Players each take on the roll of a Ninja competing to be the student of a master.  Each player starts with two cards, each of which is a ninja move, and the rest of the cards are dealt face-up on the play area. Players progress across the board and add new moves to their hand.It looks like a lot of fun

This is pretty straight forward. It is a munchkin themed version of Smash-Up. Both of these are popular games that turn genres upside down in an attempt at random humor. This looks like a lot of fun.

This one was a Kennerspiel des Jahres nominee for 2015. Anything that is even NOMINATED for such a prestigious award is going to be worth at least a look.

This is the second edition of a game that was released several years ago.

What kid doesn’t want to play the role of a mad scientist? This is purportedly a quick playing game where players are racing to build crazy contraptions like freeze rays and attack robots before their opponents can.

I would never have thought that I would want so desperately to play a board game based on running a news paper during the early 1900’s, but this worker placement game is doing it to me.

This a game where each player takes on the role of a squire who is competing with the other players in an attempt to earn chivalry points. The art is hilarious and it is being published by IELLO who has done some really great games in the past.

This list is not even close to complete. we are certain that there are tons of games we didn’t have enough room to talk about. What did we miss? Sound off in the comments!