Exciting things happen in the world of gaming every single day. Everything happens so quickly that it can be tough for a parent to keep track of. Between work, carting the kids to everywhere under the sun, cooking, cleaning, and maybe (just maybe) getting a chance to sleep for a few hours parents just don’t have the time to keep up with everything happening in their child’s hobby.

If the above paragraph describes you, then we have an answer for you. EFG will be publishing a digest of some of the biggest gaming news that your family needs to know every Monday night!

Nintendo posted a massive Nintendo Direct video last week that detailed a lot of the games coming to the Nintendo 3DS and the Nintendo Switch through the end of the year.

You can see a list of the announcements in a wrap-up press release here.

We also talked about it on our most recent episode of Engage!: A Family Gaming Podcast!

PDP used a racial slur while streaming PlayerUnknown’s Battlegrounds last week. He has since apologized (for whatever that’s worth), but that hasn’t stopped several independent developers filing DMCA claims against PDP. One of those claims has been accepted by YouTube so far, which is a big problem for the streamer because he stands to lose his whole channel if he gets three of those claims.

I wrote about this incident because I truly think this is a teachable moment that parents shouldn’t miss. This is especially true if they have kids who watch PewDiePie.

Apple held their annual press event to unveil their new iPhones last week. They announced two new phones: The iPhone 8 and the iPhone X (ten), but the biggest gaming news came from Jenova Chen. He is the founder of thatgamecompany, the company who made Journey on the PS3.

He announced their newest game, “Sky,” will be coming first to Apple platforms like iPhone, iPad, and Apple TV. We don’t know much else aside from the beautiful art style.

This is exciting because Journey is one of the best games ever made and all of thatgamecompany’s games have been interesting to play.

Okami is a Zelda-like game that was released by Capcom on the PS2. It was later brought over to the Wii. It is highly regarded as an amazing game and its art style is tailor-made for an HD remaster.

Even better? The HD port is coming out very soon (December 12, 2017) and will only be $19.99. It will be available on PS4, Xbox One, and PC. It seems like a great fit for the Nintendo Switch, but they haven’t announced that it will arrive there at any point (yet). 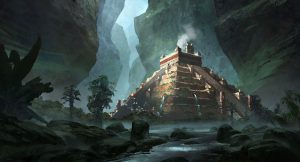 The newest expansion in the 25-year history of Magic: The Gathering is coming out on  September 29, 2017. The set is called Ixalan and it is building a lot of excitement among MTG fans new and old.

This new set is bringing back merfolk as a major creature type and putting a heavy focus on pirates and dinosaurs (!) as well.

The full set has been revealed and a visual spoiler is available here on MTGSalvation.com.

Episode 102:Nintendo, Destiny 2, and The Man Behind the Curtain