We reported on Yooka-Laylee last month. We knew that it would be a 3D platformer that would be developed by Playtonic Games, a company comprised entirely of Ex-Rare developers. We didn’t know much else at the time, but that it all over now and the Kickstarter has not only launched, but it was the fastest video game Kickstarter to reach $1 million in the history of the crowd funding site. (That is a very big deal!)

The main characters in the Yooka-Laylee are an iguana named Yooka, and a friendly bat named Laylee. The two of them will work together to explore 3d environments, avoid enemies, and find hidden items and collectibles. The exact size and scope of the game was originally left to be determined by the success of the Kickstarter, but since the campaign has raised over $2 million dollars and still has 33 days to go we can assume that it will be pretty impressive. Just take a look at the stretch goals that have already been unlocked! 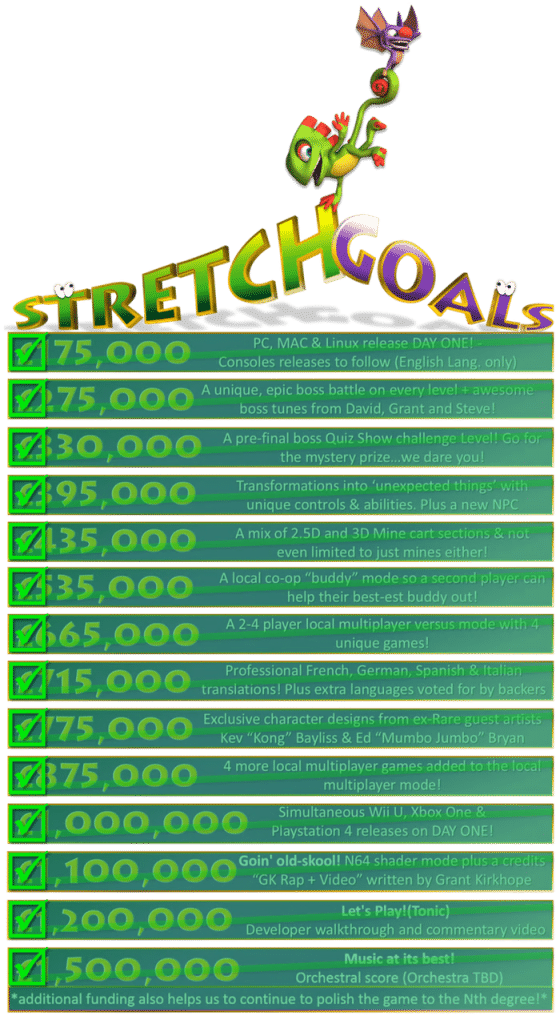 The success of this Kickstarter is especially interesting when you consider that many people left the 3d platforming genre for dead as there hasn’t been a real entry for years. It stands to reason, however, that the massive success here will show publishers that there are hungry fans waiting to play these games. Lets hope that the surge of 3d platformers in the coming years ends up resulting in some more good games!

Keep your eyes on Engaged Family Gaming for more info about this and other great family titles!