Mobile games have been getting a bad rap for years. A huge percentage of the population views them as free-to-play throwaway games. This makes a lot of people very hesitant to spend money on a mobile game. This is unfortunate because there are some real gems out there. One of the best of them right now is 80 Days.

80 Days is a resource management game hidden within a beautifully illustrated visual novel. The premise is built around the classic novel “Around the World in Eighty Days” by Jules Verne. Players take on the role of a steward for an eccentric British gentleman who makes a bet that he can travel around the world in less than eighty days. This is no real problem now, but since the story takes place more than 100 years ago it presents some serious logistical challenges.

Players need to make careful decisions about riding by car, boat, airship, underwater train, or even walking city (Yes. I said walking city. Head towards Calcutta. You’ll see). The different modes of transportation all vary by duration, departure schedule, and comfort so you will need to balance them carefully to make sure you don’t run out of time or money. You’ll also need to keep your boss happy. If he becomes too uncomfortable the game is over!

The game starts in London and as the game begins you are provided with a few different routes of travel to choose from. You select your mode of travel and are tasked with deciding your next route upon arrival. You can do this by purchasing maps or even exploring the city. You have to be careful not to spend too much time exploring though, because you might lose a whole day waiting for a motorcar or train to come back and depart! The excitement of arriving at a new city and figuring how much time I had before I had to run was a highlight of the game for me.

All of this is wrapped up with gorgeously drawn backdrops for each of the featured cities and modes of transportation. The minimalist art style is very reserved in its use of color, but it is strikingly beautiful regardless. If you are a member of your family has any interest in illustration you could spend hours looking at this game.

With all of that said the hidden strength in this game is its potential as a teaching tool. We live in an era where world geography (and to some degree even local geography) is not a heavy focal point. This game forces players to learn it in order to be successful. It certainly would not replace a geography curriculum, but it is far less costly than most sets of flash cards and will be far more engaging for the user. 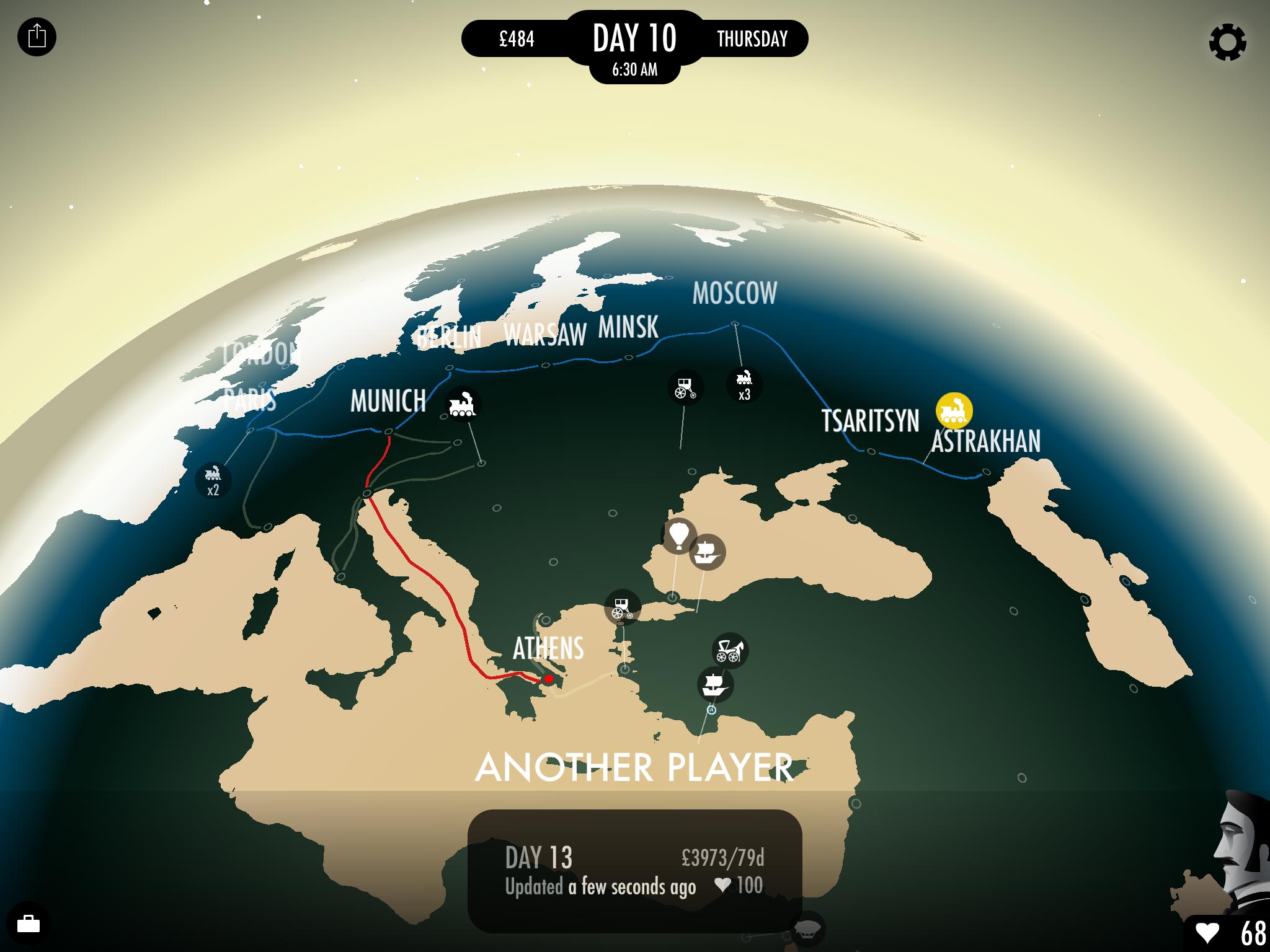 The 80 Days world map is minimalist, but includes everything you need to play!

I consider this game to be family friendly. It is a visual novel so there is very little in the way of inappropriate imagery. Some of the cities you encounter are in war-torn areas, but there is nothing to be concerned about.

Concerned parents can play through the game once be3fore sharing it with their children, but this is more than appropriate for almost every family.

80 Days is a challenging game that is almost unplayable unless the player is a very good reader. They could randomly select destinations, but there are clues hidden in conversation that are vital to success.

This is, however, an excellent game for parents or older siblings to play WITH their children. One party simply reads the text and players can discuss the different options. The clock does continue during most phases of the game so people will need to think and negotiate quickly, but that is half of the excitement!

In a world dominated by mobile games that are free to play this is a game that is worth every penny and more. There is a lot of entertainment here for less than five dollars.

Engaged Family Gaming’s Games of the Year for 2014

Beast Quest for iOS and Android is Coming Soon!