Which Spider-Man is in Spider-Man Unlimited? All of them—or close to it. The makers boast that the game contains more playable Spider-Men ever. How do they manage that? Handy narrative magic, of course. Spider-Man’s nemeses, the Sinister Six, have opened an inter-dimensional rift, threatening to destroy the world as we know it. Spider-Man must recruit alternate versions of himself from across the dimensions and defeat each member of the Sinister Six one by one. Unfortunately each member is recruiting his own dastardly alternates, meaning the road ahead will not be easy.

Spider-Man Unlimited plays like an infinite runner, but isn’t endless. You spend missions collecting vials, avoiding obstacles, and punching enemies. The courses also have segments of web-slinging across buildings and freefalling from rooftops. It’s lively and responsive, perfectly capturing the feel of Spidey’s acrobatics.

The comic book art style looks clear and vibrant on touch screen devices. There’s impressive detail in the various environments. Regarding gameplay, the variety of enemies and obstacles prevents missions from feeling tedious and repetitive.

The game’s three modes accommodate different types of players, letting you play how you want. If you prefer to focus on ranking on the leaderboards for unique prizes, there’s event mode. If you want to rack up a high score to dominate your friends, there’s unlimited mode. If you’d rather collect as many Spider-Men as possible and complete each issue of the story, you can.

The Spider-Man recruitment mechanic will be familiar to anyone who plays collectible card games. The random summoning process means you never know who you’re going to get. Each version of Spidey has a distinct look, unique bonuses, and a ranking based on rarity. There’s also a description of his place in Marvel lore. This appeals to longtime Spidey fans but remains fun and informative for newcomers.

The game brings a bright and energetic experience. This remains consistent throughout, but the more the game advances, the more constricting the developer’s money-making tactics become. It’s a shame because there’s nothing to complain about when considering the game itself, but these restrictions soon start to spoil what’s otherwise a pleasure.

There isn’t much in Spider-Man Unlimited that the free-to-play model doesn’t limit. It’s possible to play without spending any real money, but if you’re looking to advance the story mode with reasonable speed it’s not realistic. In-game currency is readily obtainable through play, but not in helpful quantities when facing the costs necessary for advancement. The price in real currency isn’t much better. It takes just under $5.00 to summon a rare character and about $10.00 to increase a rare character’s level cap. But if you enjoy just being able to play, the non-story modes provide rewarding challenges without the prohibitive level requirements. I particularly enjoy the competition of event mode and find it entertaining on its own.

Unfortunately, even those looking just to play soon hit another limit hard and fast: the Spidey Energy Meter. No matter the mode, every round of play consumes an energy point. Even successfully completed rounds deplete the meter, which maxes at five points. A point renews every ten minutes. An average round of play lasts about 30-60 seconds, so at best you’ll be waiting almost an hour for five minutes of play. This may be a common feature in free-to-play apps, but a game unforgiving of split second slip-ups is the worst place for a mechanic like this. While you can purchase energy refills for the equivalent of a few cents, you’ll hit the same problem five rounds later. Prepare to be frustrated. 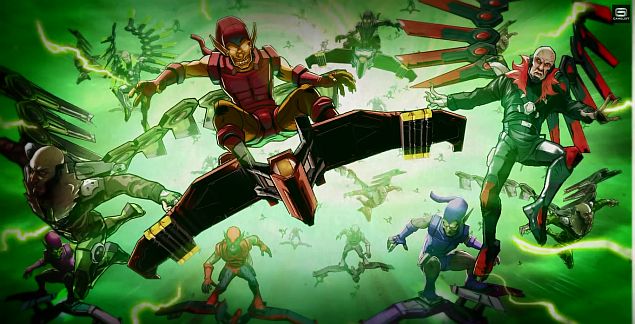 This game has “Unlimited” villains too!

As you’d expect, the game contains plenty of comic book style violence. It’s the bloodless punches and kicks typical of the superhero genre, nothing you wouldn’t see on a similar children’s cartoon. Dialogue is geared toward a young audience, so there’s nothing to worry about here either.

The controls are simple to learn and intuitive. However, the fast pace calls for quick reaction speed and precise motor skills. Combined with the skimpy energy meter, this makes the game nearly impossible for younger children to play since they can’t just get up and go again.

Parents, please make sure to activate your device’s pay lock. It’s incredibly easy and tempting to rack up in-app purchases in a matter of minutes.

The game itself is fun, fast-paced, and addictive. Spidey fans will appreciate the sheer amount of lore. There’s not much to lose since the game is free. But the money-making tactics are incredibly obvious, obstructive, and overshadow an otherwise well-made game.