Reviewed on iOS, available on Android

When a trailer for a WWE themed fighting game by Nether Realm Studios shows up on RAW I was excited. I love fighting games and they have done an excellent job with both Mortal Kombat and Injustice: Gods Among Us in recent years. This felt like a slam dunk. That excitement faded a bit when I found that that it would be a free to play mobile game as opposed to the deep tournament worthy fighting game I was hoping for.

Nevertheless, I wanted to give the game a shot. I enjoyed the Injustice mobile game for what it was so it couldn’t possibly hurt. Right? I am glad that I did because WWE Immortals is a lot of fun.

The first thing that makes WWE Immortals stand out from other wrestling themed games is its presentation. This is not a pro-wrestling simulator by any stretch of the imagination. This is a full on fantasy based fighting game that features witches, giants, demons, and angels. The premise is hokey, but it fits. Bray Wyatt has found a magic lantern that will help empower him to show the way to his followers. The Authority steals it from him and activates its power. This tears a whole in reality and brings different versions of the WWE superstars together to do what they do best: fight! 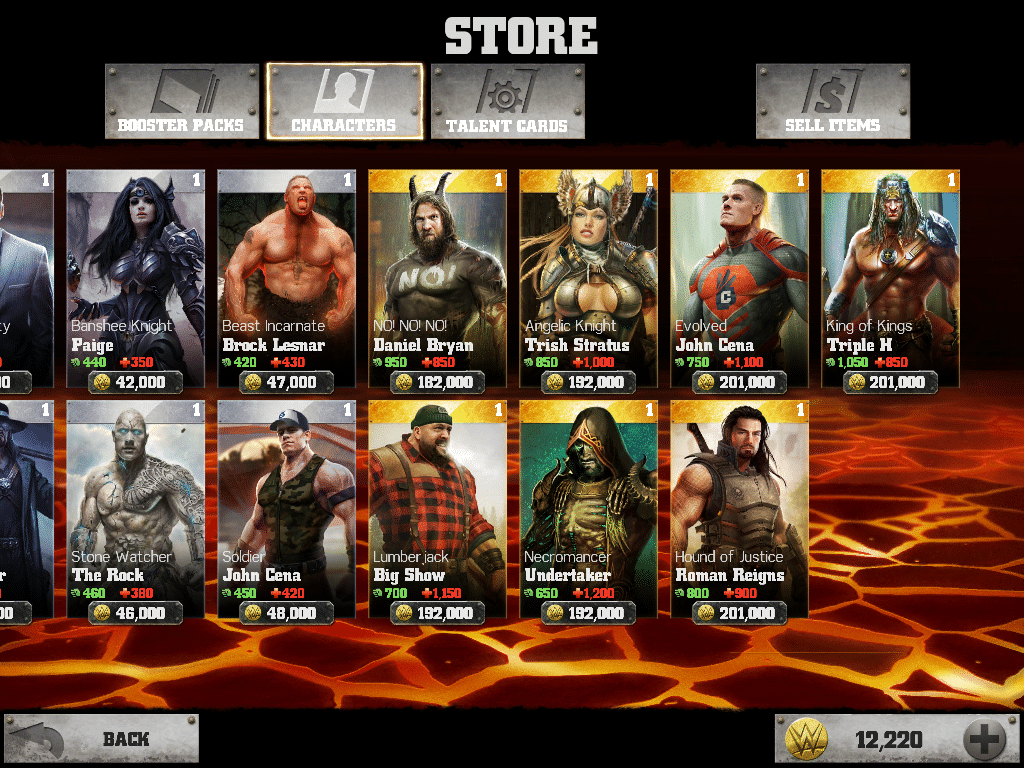 The best of the best!

The characters themselves are all fantasy expressions of their in ring personas. Sheamus is an ancient druid. The Big Show is a giant. The Rock is literally made of stone and lightning (He is the most electrifying man in sports and entertainment after all). Each character has a unique move set that are at least thematically similar to their moves in the ring. They are, however, heavily stylized and exaggerated. Kane is a big guy, but he isn’t getting the Big Show up on his shoulders for a power bomb and jumping in the air. This was my family’s favorite part of the game. We view WWE superstars as close-to-real-life superheroes and villains.WWE Immortals presents them as exactly that. Engaged Family Gaming has a complete list of the WWE superstars that appear in the game here. 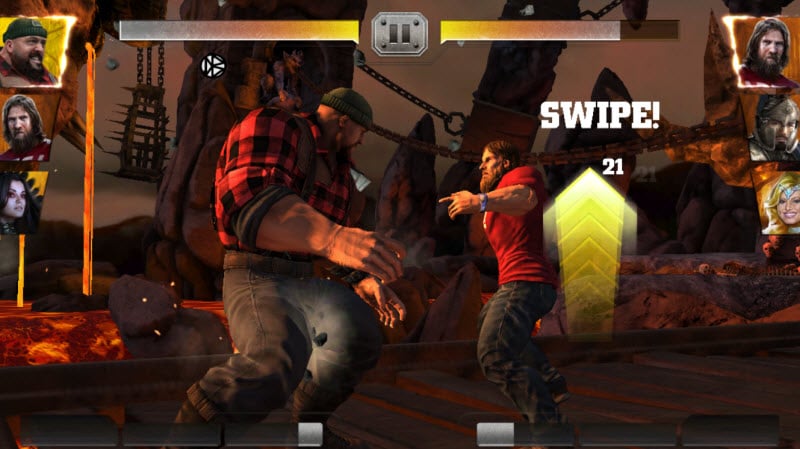 The action is touch based, but very intense.

Parents will face some of the same dilemmas with WWE Immortals as they would with the TV show.

First, it is a game built around combat. All of the action is built around fighting other characters. That can be excused on the show though because it is all under the guise of athletic competition. We, as adults, know that the match outcomes are decided beforehand, but the story they are putting forward is one of “superstars” competing for championships. The game doesn’t share that pretense at all. This is a pure fighting game with a loose story. I don’t know that this is an “issue” per se though. I would think that any parent who is comfortable letting their child watch a RAW broadcast will be comfortable with this game.

Second, and most importantly, the female characters all share “commercially idealized” bodies and wear revealing outfits. There is nothing risqué happening on screen, but it is something worth mentioning for parents who might be concerned about that sort of thing.

I recently praised Super Smash Bros for Wii U for its accessibility for less experienced players and WWE Immortals follows suit. The entire game is played based on tapping the screen or swiping in the direction of an arrow. Even the most inexperienced gamers will be able to jam on the screen and make characters play. Movement isn’t even an issue as that is entirely handled by the machine.

Younger players might have difficulty with the meta-game involved in choosing the correct three fighter team. But, they will be able to play even if they just choose their favorites.

It is hard not to recommend giving a free app a chance. But, even if we set that aside WWE Immortals is well put together and provides a lot of fun for very little cost. I wish that some of the upper tier characters were less costly, but that is a small complaint.

Interesting idea – WWE upgraded. I would have shrugged this game off, but it means something that it’s by the same designers that put together Mortal Kombat. Thanks for the review!