Video games are ubiquitous today. Virtually everyone has a home console or, at least, a smartphone that can play games. This has created an entire generation of kids who dream of making their own games when they grow up. The problem is that making games has, so far, been arcane and difficult to understand. I write about video games every day and even I struggle to understand exactly how the process works. (I’m actually convinced that some of these companies use magic.) Fortunately, a number of companies are working on finding creative solutions to that problem. 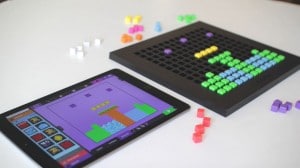 Bloxels, marketed as“The most kid-friendly video game creation platform ever,” was a sight to behold at New York Toy Fair this year. The system consists of an iPad app and a checkerboard-esque platform with a series of slots in which its user can place different colored cubes. The app is programed to read these cubes using the iPad’s camera and use them to generate pixel art that players can use to create their own platform games.

There are two layers to the design process. First,players can use the layout grid to design individual characters or single block sized segments of scenery. The second layer allows players to design individual levels. Each different color block represents different a different component of the level from a platform, to a hazard, to an enemy. The process is simple and it is easy for players to visualize what they are doing while creating each screen. 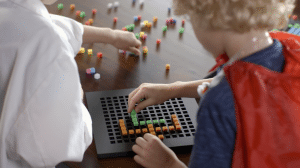 Budding game designers have a great deal of artistic control over their games and can even go so far as to design the backdrops for their levels, add destructible objects, to place powerups, or even story elements.

Even better? Players have access to what is called the Infinity Wall. This is a place where players can share their creations with others OR they can take interesting components to and to their own games. The designers expect that there will be some players who really only want to do one part or the other and are happy to let those two communities build off of eachother.

There are clearly some shortfalls that Bloxels will need to overcome though. This is a product that produces platformer games to be played on the iPad, which can be tricky to use because it lacks real buttons. But, thankfully, no one is touting this as the next Unreal Engine. This is a creativity tool that helps establish some strong fundamentals in design and helps reinforce the idea that most game design is done in segments.

The Bloxels system retails for $49.99 and includes everything you need to jump right into the world of video game design.