The coolest thing I got my hands on at New York Toy Fair was an app-connected smart duck. Let’s take a second to let that sink in. 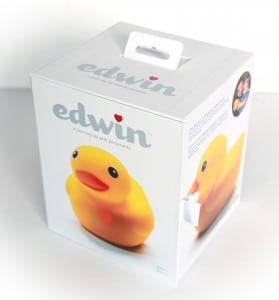 I met with the team from pi lab, the inventors of a toy called Edwin the Duck, at Toy Fair and was instantly impressed. I was skeptical at first. In fact, my first question to them was why a rubber duck was lined up in the tech toys section surrounded by drones and 3D printers. Their answer was simple. Edwin was “No Ordinary Duck.” He was, in fact, a toy that worked in tandem with a series of iOS apps that help turn him from a tub toy into a night light, and an interactive controller.

Edwin the Duck is, without question, the ultimate Trojan Horse for educational material. Children will build fond memories as they play with him in the bathtub or as they see him watching over them as they fall asleep. He can then use those emotional connections to help funnel knowledge right into their heads. I know that all sounds dramatic, but it made total sense once I started playing with the toy.

The team behind Edwin truly believes that “the only way to teach a child is to emotionally connect with them.” In fact, the specifically chose to make their toy a duck as opposed to a bear or other animal because the rubber duck is iconic. The team found, during their product research, that just about everyone remembered owning one as a child even if they weren’t absolutely certain of it. That kind of a connection with a child’s toy is hard to ignore. 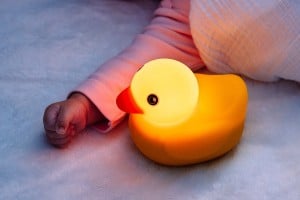 Edwin is more than just a rubber ducky and a night light though. He is also the controller, for lack of a better term, for a series of interactive learning games available on iOS. He has a gyroscope and four sensors that register taps the same way a button does (one on his front, one on his back, and one on each of his wings). The learning apps, right now, teach things like shapes and letter recognition, but there is a lot of potential to add more complex concepts later on. 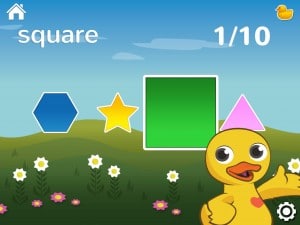 The team indicated that it is being marketed as a toy for ages zero to nine right now, but a lot of the content right now is targeted towards younger kids. The intention is to have the content grow as their audience does. Those emotional connections between toy and child will only get stronger. Pi lab theorizes that the content they will be able to deliver will grow alongside it.

Unlike many products that I saw at Toy Fair, Edwin the duck is currently available for sale at the Apple Store and at Best Buy for $99. This is, admittedly, pricey and will likely place this toy outside of some people’s budget. But, this is a very impressive piece of technology that is definitely worth it for families that can swing the price. I definitely enjoyed my limited time with it and I’m not even a little kid!

12 Awesome Board Games that Teach Reading and...

7 Board Games That Teach Math Skills (and...