Originz is a card game where players use awesome superpowers to battle for supremacy on the kitchen table. Flavor Faction, the people behind the game, look like they have a hit on their hands as it heads to Kickstarter September 5th.

Originz: The Super Powered Card Game includes twelve decks of cards that are each focused around a different super power (or Origin). The list includes things like Weather Control, Power Armor, and Super Strength.

Before we go much further I need to point out one thing. You’ll notice that I said the decks were based on various super powers as opposed to different super heroes. This is critical, because Originz isn’t about playing as a superhero or supervillain. It is about pretending to be one yourself. There are plenty of games where you get to play as Iron Man, Batman, or the Hulk. But, Originz is all about making YOU the hero and that makes a big difference when it comes to theme. 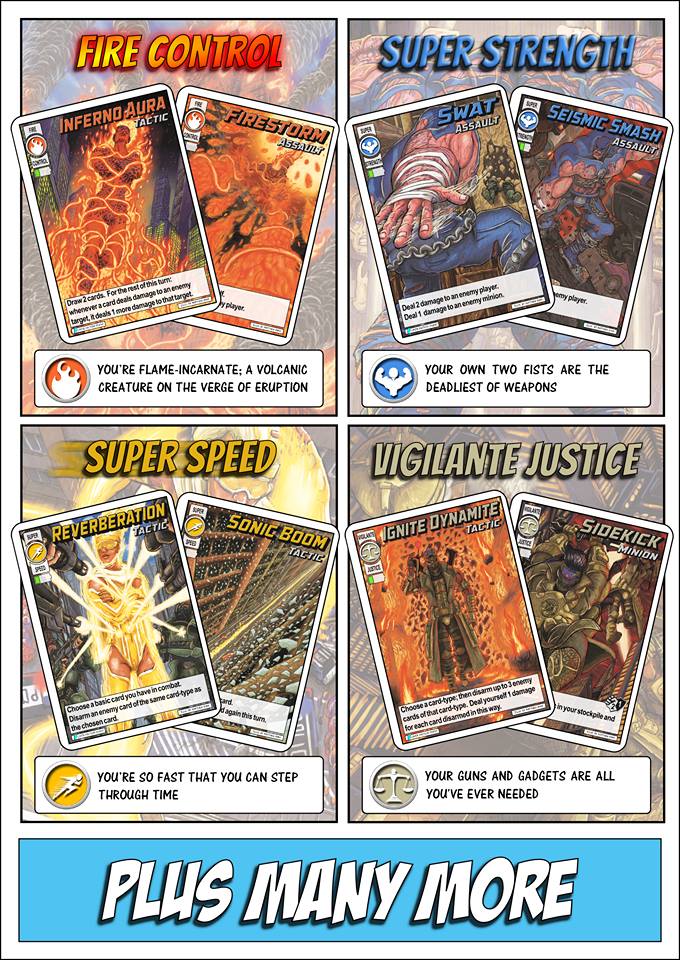 It is impossible to play this game and not recognize elements from other games and intellectual  properties. It is a card battle game that is reminiscent of Magic: The Gathering, and that features decks based on the superpowers of some of our favorite superheroes and villains. You might think that those familiar elements might take away from the experience. But, they don’t. Instead, it helped our play group feel immediately comfortable and helped us get into the action quickly.

Gameplay could not be simpler. Players start their turns with three energy and may use that energy to play cards from their hand OR activate them. This is important because this limitation prevents you from playing and using your most powerful cards in the same turn. Any cards that you do activate are put on the bottom of your deck to, potentially, be drawn later. Take a look at this great gameplay video!

The most interesting feature here is that each player’s deck acts as their life total and players are forced to discard cards when they take damage. This makes attacking your opponents about more than just dealing damage. The attacks can actually disrupt their strategies by forcing them to take important cards off of the top of their deck. As we played through our many demo games this mechanic reminded my playgroup of all of the times we’ve seen our favorite heroes win the day by ruining their opponents plans as opposed to just punching them. That may not have been the original design intention, but it felt great to us.

Using your cards as a life total also makes the game state easy to keep track of. Games like Magic and Pokemon require some way to keep track of life totals. People use all sorts of creative methods for doing so, but none of them are necessary here. You just count your cards. You can’t help but appreciate the elegance in the game design.

Many of our games were played as one on one battles using various decks, but this game is designed to be a tool for creating whatever kind of battle you can imagine. You could draft. You could pick a few decks and put them together for a SUPER battle. The game and its components are infinitely flexible.

There is nothing inappropriate in this game. It features super hero art, so if your kids are accustomed to comic books and their associated moves, then this should be no problem.

The age recommendation for this one is 10+ and we think it is accurate. The decks are small, but they are all build around very specific combinations of cards that take some thinking to pilot correctly. Our oldest son is 10 and was successful, but he definitely had to think about it.

This is a very cool game that features a lot of content for the price. I definitely recommend backing this one.