Battle Princess Madelyn, by Casual Bit Games, is a game I’ve been keeping my eye on for a very long time. How could I NOT talk about a game that is being made for an awesome little girl by her super cool dad?

The elevator pitch on this game is fairly simple. Battle Princess Madelyn is a retro styled platforming game that is heavily influenced by the super-challenging Ghouls and Ghosts. The story behind the game’s development is adorable as well.

Chris’s daughter Maddi really enjoyed watching him play the above mentioned Ghouls and Ghosts. She especially loved watching him play the first level over and over again. She loved it so much, in fact, that eventually she asked to play, but there was a catch. She knew her dad was a talented programmer so she asked him to put her into the game! He knew he couldn’t do that… but he offered her one better. Why not make a game for her. It could be a new game that would feature her as the brave Battle Princess. She liked the idea, but had a major problem with it. She said to her dad, “But, dad. Girls can’t be knights!” Chris scoffed at that problem. “Pfff. What color do you want your armor to be?” And with that, they were off.

Chris, the super-cool dad himself, took a moment out of his busy schedule to answer some of my questions about their game and how development is going. For more information about the game take a look at the Kickstarter video below and read the Q and A afterwards. I am certain you’ll fall in love with this game just like I have. 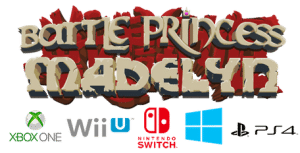 I’ve read the story about how the game started development and it sounds awesome. I have to ask though… Ghosts and Goblins is a bit macabre for most kids. What about that game drew your daughter in?

Having a father who’s basically sharing a brain with Tim Burton, she’s pretty used to everything. I introduced her to my 80’s cartoons at the age of 3. The ones she liked? The Real Ghostbusters and Beetlejuice and a bit of Inspector Gadget. I was the same way as a little kid though, always drawn in by skeletons and ghosts. Ghost Rider being my favorite comic book. But all in all I don’t find it macabre at all, It’s all just make believe and she loves it!

What were her favorite parts of the original game and how are they being reflected in the game you are making?

Level one of Ghouls ‘n Ghosts. Over and over, she just loved watching me destroy the first boss. “What is he daddy?” “I dunno. Maybe some kind of Zombie… lizard.. Cyclops thing? Who knows.” It’s really only the first level we Look to. She never cared for me to go past the Shielder, just kick its butt.

Why was it so important for her for the game to have a female protagonist? Are there other female characters that she likes out there right now?

For Maddi it really has nothing to do with a female protagonist at all. It all has to do with her wanting to be the kicker of the monster butts! As for other characters, no not really. She was actually upset when she found out the new Ghostbusters movie wasn’t with the classic “Peter and Egon”.

How long has your game been in active development?

This game has been in development for roughly two and a half years officially, between an HTML5 prototype I made while Daven was finishing off bug fixes and new features for Insanity’s Blade, and the full game in Unity (aka Pre-Alpha build) that we see today which Daven started coding last year in C#. The narrative of the game has been brewing in my mind since childhood, but was reignited when Maddi recently went through the loss of our poor old Fritzy in real life.

How involved has your daughter been in the development process so far? Is she helping with design? Or is she playing more of an artistic directorial role?

There are literally stacks of monster drawings and levels she wants in the game. She has a desk next to mine where she will draw more monsters as she thinks of them. She’s come up with entire boss fight gameplay last year which frankly blew my mind. A detailed boss fight, it wasn’t just shoot shoot shoot. It was do X to do Y so the boss will turn around and you can shoot him in the bum!

This game obviously has retro influences. Are there any other games that have influenced you or your team?

This game really pays homage to a plethora of 2D platformers, although Ghouls ‘n Ghosts is the primary attraction factor we actually take some elements of Wonder Boy 3: The Dragon’s Trap, MegaMan and Duck Tales in an interesting way too (see if you can spot some of it in the Pre-Alpha). Alongside the overworld map and free level selection of unlocked stages, we think this will remind players of many of the games of their childhood, or interest new gamers in playing some retro titles! However, Battle Princess Madelyn is much more than the sum of its parts, as there’s many great ideas that Maddi comes up with which I can’t say I have ever heard before, and they’re definitely going to be fun-filled for players young and old alike!

Has your game gone through any major design changes since development started? What did your first prototype look like?

The only thing that’s really changed besides the engine changing over to Unity, is the addition of animations, and enemies. The first level is much bigger with the hidden levels. But overall these were things that were going to happen. The prototype had a full blown tutorial stage which will not be in the final game, it will be shown as a cinematic instead to avoid ‘hand-holding’ that many did not like in the prototype. Oh and the lighting and fancy effects didn’t exist in the prototype either!

I’m sure you’ve learned a lot through this process. Do you have any advice for parents who have kids interested in game design?

Remember that your kids imaginations aren’t hampered by seeing other people’s works yet. They are still fresh eyed and innocent. The things they come up with can be far more imaginative and amazing than you’d think.

Your Kickstarter is doing very well. This means that you and your team may be creating a female character that will draw positive attention as you move towards release. What do you all think of that? Are you looking forward to it?

We believe that it’s great when a character is created that is believable and interesting, and that’s exactly what my daughter is! We also think it’s fantastic that Maddi can be a catalyst for inspiring young girl gamers that they can be the hero too! This game is first and foremost a game for Maddi to me, but if it shares positive messages to the players too then we couldn’t ask for anything better!