My Little Pony: Tales of Equestria is the MLP Tabletop RPG We’ve Been Waiting For!

My Little Pony: Friendship is Magic is a franchise that has managed to transform a nearly forgotten 80’s toy property into a cultural icon. The cartoon, created by Lauren Faust, is about to enter its 7th season on April 15th. The toys are a massive hit and you can see merchandise everywhere. But, the franchise will be going in a bold new direction on April 21st.

My Little Pony: Tales of Equestria is an officially licensed tabletop roleplaying game that is being developed by Ninja Division. The game will release just about a week after the 7th season of the cartoon airs. 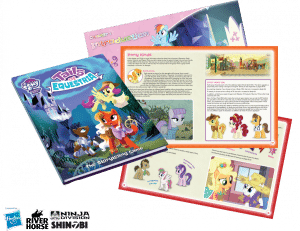 Tales of Equestria is a pen and paper storytelling game that is designed for two to six players. It will play similarly to other games in the genre. One player will take on the role of Game Master (GM) and the other players will create their own pony characters. The players will then adventure together and overcome obstacles using the power of friendship!

The game will launch with a full color 152-page rulebook that will help with character creation, provide adventure scenarios, and teach the group how to play the game. The goal is to give fans of the series a chance to bring the world to life. Players will be able to use the rulebook to create themselves as citizens of Equestria.

It’s not all rulebooks here though folks. My Little Pony: Tokens of Friendship is a game expansion that includes 12 plastic gemstones to help give the game more visual flare. It also gives younger kids something to play with while it isn’t necessarily their turn.

We don’t know a lot about how the game will play. But, I can confirm that our house is already excited to get our hands on this game. We are HUGE My Little Pony: Friendship is Magic fans and we getting this one right away!

Keep your eyes on Engaged Family Gaming for more info about the game as it comes close to launch!

Three Reasons to Play Video Games With Your...

152 pages of rules? Wow! I wonder if they’ll have a condensed “child-friendly” version in there to help younger players understand how to play?

My Little Pony? ‘Nuff said. I have a niece who would love this.