There is a saying that says if you know one person with a disability, then you know exactly one person with a disability. Each person’s needs are unique and this created a special challenge for engineers who are making adaptive equipment to help them overcome challenges and participate in activities that many of us take for granted. The video game space has been particularly challenging in that regard. No one really thinks about how complex the controls in our games have gotten over the years. The Xbox One controller, for example, has over 17 buttons spread out over its surface. Some of them being face buttons that are intended to be pressed using a thumb, while others are triggers that need to be pulled using a pointer finger. The input variety is a potential problem for folks who may lack the use of all of their digits. But the challenges go beyond that. Controllers are heavy so it can be incredibly challenging for some someone with weak arm muscles due to injury or a degenerative illness to hold them for long periods.

There are some groups that have sprung up to help overcome these challenges for some people. The Able Gamers is one such organization. They formed to help build custom solutions for gamers with disabilities and to advocate on behalf of them with game publishers and console manufacturers. Unfortunately, their reach is limited. Custom setups can be incredibly expensive and require complex technical skills to build and maintain. This prevents them from helping as many people as they would like to.

Microsoft has stepped up to the plate to give organizations like theirs a wonderful tool. They have officially announced the Xbox Adaptive Controller. It’s a remarkable device that will open up the wide world of video games to a population that has desperately wanted to play but has been held back by unwieldy controllers and hesitant manufacturers.

It was partially leaked a few days ahead of its official announcement and when I saw the images out of context I was very concerned. How useful could this device be? It was a white box with a D-pad and two giant buttons. I had no idea how it would be useful to people with disabilities. The official announcement clear all of that up for me. The Adaptive Controller is more of an adapter/hub for additional control devices than it is a standalone controller. The back of the device is a long line of jacks to attach different devices like buttons, pedals, joysticks, and all manner of other mechanisms. The idea is to facilitate whatever kinda of custom setup a disables gamer might need without having to manufacture something specifically for them.

We can’t forget that this controller is being manufactured by Microsoft. Say what you will about them, but they are experts at designing, manufacturing, and delivering high-quality consumer electronics at scale. I have a hard time believing that a small company with less leverage would be able to produce a piece of equipment like this and sell it for $99.99.

Microsoft wasn’t alone either. They worked with several other Third Party developers like Logitech and Quadstick. 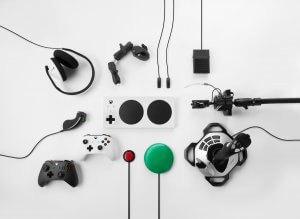 This aligns perfectly with Microsofts Gaming For Everyone initiatives. Microsoft’s CEO Jenny Lay-Flurrie wrote a blog post to help announce the device. In it she wrote, “In the long term, we believe that designing with and for people with disabilities will lead to innovations in ubiquitous inclusive computing. In the short term, it’s about ensuring that accessibility is woven into the fabric of how we design and build. Accessibility isn’t optional.”

These words should be a call to action to all hardware manufacturers to step their respective games up.

Its rather fitting that this was announced on Global Accessibility Awareness Day. This is a day that is intended to encourage everyone to think about how we can reach a future where people of all abilities are able to enjoy our increasingly digital world together. Microsoft took a big step today. Here’s hoping that others will follow them.