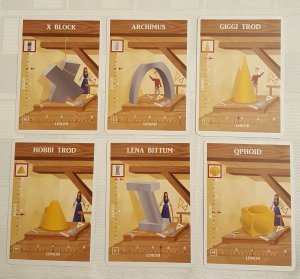 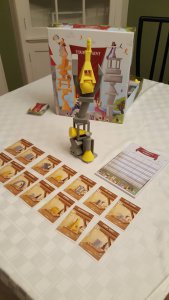 Poop the Game from Breaking Games is a toilet and pooping themed card game.  It is a 2-5 player game recommended for ages 6 and up. A second deck, labeled the Party Pooper Edition, can be incorporated to make this up to a 10 player game. Play time is estimated at 15 minutes.  This was a Kickstarter in 2014 that was successfully funded and has expanded since then to include a Public Restroom Edition, which was also funded through Kickstarter.

The objective of the game is to be the first to run out of cards.  To play, a toilet card is placed in the center.  The number on it represents the “clog” number.  Each player is dealt five cards and take turns placing cards on the toilet, and cards are stacked staggered so they all are visible.  Cards with poop on them have a value from one to four bases on the amount of poop represented.  Players are not allowed to meet or exceed the clog number.  If the only cards they have will meet or exceed the clog number then the toilet is “clogged” and they have to add all the cards from that toilet to their hands and flip a new toilet card.  If three cards of the same color are played in a row the toilet is flushed, all other players draw a card and the “flusher” begin play again using the same toilet.  Wild cards add interesting twists to the strategy of the game. On the wild cards there are directions containing sounds or actions on the bottom of the card, and when the wild card is played the player must do this sound/action until another player plays the same wild card.  Failure to do so results in having to draw a card if it is noticed by another player and called. Some of the actions are “grunt on turn”, “hold nose on turn”, and  “fart sound on turn”.

This game was as ridiculous as it sounds.  It was played with two boys; a five year old and an eight year old. They enjoyed the game and found its theme hilarious.  In contrast, I had some reservations about the theme, and found the cards gross. The poop cards show poop piles with flies and some have corn pieces in the poop.  The noises and descriptions on the wild cards also added to the crass nature of the game. While the game is recommended for ages 6 and up, I was uncomfortable playing with my two boys, as it was encouraging behaviors I am trying to teach them are not appropriate in most situations, such as imitating bathroom sounds.

While the game itself is easy to play and learn, the poop theme, descriptors on the cards to act out, and the drinking game elements make it hard to recommend this game to the average family. This could be a fun and silly game for the right family and the right situation, however, I do not feel it will be a good fit for many families.

Imhotep is a Egyptian themed game by Kosmos.  It is named for the first, and most well known, Egyptian master builder: Imhotep.  Over the course of the game players use wooden blocks as stones to “build” different ancient Egyptian structures. The game is designed for 2-4 players ages 10 and takes about 40 minutes to play.   Imhotep was also a 2016 Spiel des Jahres nominee.

The components of the game are of good quality.  The wooden blocks are substantial enough to give the illusion of the stone block they represent.  The artwork of the board is beautiful and has the characteristic ancient Egyptian look without it looking ancient.  Instead the art has the aesthetic that the pharaohs might have seen during their era.

The game is played in 6 rounds.  During each turn you have to select one of four actions to take:

The objective is to build various structures in different ways to earn the most points.  Some points are awarded at the end of each round and some are awarded at the end of the game.  The are five locations to sail the ships are the Market, Pyramids, Temple, Burial Chamber, and Obelisks.  One action a player can take is to sail a ship.  There are different numbers of stones the ships can hold and to minimum sail.   Once all the ships have sailed and the stones placed, then the round ends and points needing to be added are calculated before resetting for the next round.  One of the places to said to is the Market and any player whose stones are sailed to the Market earns cards that can give them bonuses at various points of the game. At the end of the 6th round final points are counted and the winner is determined.

Imhotep has an alluring aesthetic to draw in younger gamers.  Ancient Egypt has a great deal of appeal to a wide range of ages.  This is a game that is easy to learn, but has a deeper strategy that is much more challenging.  Initially the age rating of 10 and up seemed a bit old to me since the game is so easy to learn.  However, as I played through the game it became apparent how the deeper strategy comes into play and adds a rich layer and unexpected complexity to the game.  That being said, since the game mechanics are easy to learn I feel that this game could scale slightly younger to be about 8 and up, especially with savvy gamers.This is also a wonderful gateway game to bring to the table with inexperienced games especially if the Egyptian theme is appealing to them.  Again, being easy to teach and not having overly complicated mechanics will make the game much less intimidating.

Imhotep is a a very family friendly game.  The game can scale younger to involve slightly younger members of the family.  The younger player may not be able to discern the strategies involved, but they should easily be able to follow the mechanics of the game.  This is a beautiful addition to any family collection and can be enjoyed by players with a range of skills.