A 12 year old girl named Madison wrote an article for the Washington Post (an impressive feat all on its own) that has been making some waves in the video game industry over the last few months. Two very popular games are being updated to include female default characters for the first time.

Madison, a 6th grade student, performed a comprehensive study of the top 50 endless runner games on the iOS app store to determine the available genders for the characters that you can play as in the game. Her results did not look too good for game developers.

Her article appears to have had an impact though!

Temple Run 2, one of the most popular infinite runner games in history, has made an update to their game to allow Scarlett Fox, a female character, to be selected from the start at no charge. We can hope here that the mobile development community will see this and adapt to make this the default for games going forward. 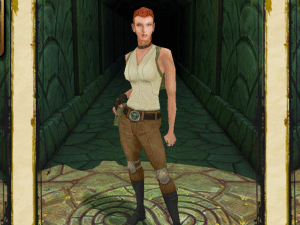 That isn’t it though! Mojang the developer behind the landmark hit Minecraft have released a female avatar named Alex on the PC/Mac and mobile platforms already, but those updates will now be coming to the Xbox and PlayStation versions of the game in the form of free updates this past Monday.

I can only hope that more developers will follow their lead!

I got a chance to exchange some email correspondence with Madison and with her parents’ permission I was able to complete an email interview to ask her some questions.  Read below to see what she said:

What is your favorite subject in school?

This year my favorite is science because I have a great teacher.

Aside from playing games on your phone what other hobbies do you have?

I love to read and be outdoors. Hanging out with my friends is another one of my favorite pastimes.

You’ve managed something that some writers dream of and never accomplish. How does a 6th grader pitch an article to the Washington Post? This has to be a cool story!

After my dad and I finished editing my op ed he (my dad) helped me find some online addresses to send it to.  One of the first ones we tried was the Washington Post and soon they responded saying they were interested.

A lot of parents would hear about your idea and wouldn’t think twice about it before they shot it down. Are your parents just that cool or did you have to work hard to convince them to let you do your project?

Both mom and dad were very supportive and liked my idea from the start. When I came to them and said, hey this is something I really want to do. They immediately helped me find the list of top 50 endless running games.

A lot of writers in the game space get negative feedback when they write about gender equality in the games we all play. How has the public responded to your article?

When the Washington Post first announced they were publishing my piece both of my parents were adamant that certain security measures must be taken. Cautions like not putting where I was from or my picture on the paper were taken. In general people have been very supportive of my research. On comment boards others have defended my viewpoint [Editor’s note: Just hearing this made me happy as message board users are usually somewhat toxic.] and I have gotten lots of positive feedback.

What are your goals for the future?

This summer I am working on another research project having to do with girl’s and boy’s preferences in characters in video games. After that I’m not sure what I’ll be doing but I’m sure I won’t be bored.

Speaking as someone who reviews games, I would think playing fifty infinite runners would be tiring. How did your research process work?

Did any of the games that you played surprise you in any way?

I was shocked how few girl characters there were.  Also there was more diversity in themes than I expected.

Did you have a favorite game?

Some of my favorites were Kiwi Dash, which is a cute game about kiwi birds, and Nyan Cat, because it had awesome music.

Now that you are keyed into mobile games have you noticed a similar trend in other types of games?

Yes. In the video games my sister and I play together, such as Lego Wii, you have to work up to get a female character.  The default is two boys. Perhaps the audience is more boys, the games being Star Wars and Pirates of the Caribbean type, but still…

Please sound off in the comments if you have additional questions or comments for Madison!