If there’s one word parents dread, it’s “more.”  Once a child latches onto something they like, they want as much as they can get their hands on, whether it’s french fries, piggyback rides, or roleplaying games. As I’ve said before, Hero Kids’ straightforward mechanics make for a great introduction to roleplaying games.  Once a kid decides they like it, though, the challenge comes to keep them in new adventures, a trial experienced Game Masters will be familiar with.  Real life is filled with so many things that eat away at your time that it can be tough to come up with missions for the players, ways to link them together, or places for them to explore.  Even a game as straightforward as Hero Kids requires time and creativity to set up new trials for the heroes. 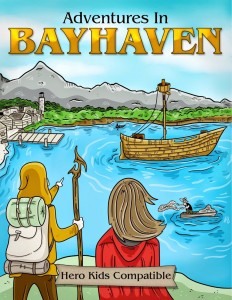 Adventures in Bayhaven looks like a lot of fun!

Adventures in Bayhaven, by Roving Band of Misfits Press, takes care of some of that legwork for you, alleviating that stress with a series of new adventures, centered in the port city of Bayhaven.  Adventurous kids will interact with the locals, establish themselves as heroes, and carry out acts of bravery. What sets Adventures in Bayhaven apart from the main Hero Kids game is not the list of the twenty-one adventures planned to be released this year (though that is entirely awesome in and of its own right), but the gazetteer and optional rules that come along with the adventures. The gazetteer expands the world, providing information on the city, including a list of inhabitants (complete with descriptions and personalities) and several maps (including an unlabeled map that the adventurers can label…or just color when they are bored).  The consistent location links the adventures together around a central city, providing recurring characters for the players to get to know and work with.  While the adventures are technically all independent, as they all center around the port city of Bayhaven, and given that the Kids will interact with certain characters over and over again, it’s easy to string them together if needed.

Were your hero kids successful in catching a thief?  The captain of the guard is more likely to trust them to escort someone now.  The optional rules allow the players to pick up extra perks from continuing their adventures, up to and including becoming apprentices to assorted adults (and getting the benefits from that job.) If you’ve got dedicated Hero Kids to entertain, Adventures in Bayhaven is a solid route to take.  The sheer number of available missions means they’ll be busy for a long time, and the additional rules and setting information makes game mastering a lot easier.

Take a look at our review of Hero Kids – Space Heroes to see some other content for the game!

My start with gaming is lost in the mists of time, back when games consisted of nothing more than sticks and rocks. As the eons passed, I progressed through the classic board and video games until I finally found roleplaying games. This is widely regarded as one of my better discoveries, as it was ultimately responsible for most of the best friendships I’ve ever had. I’m a gaming generalist, interested in everything from consoles and card games to mobile apps and live-action roleplaying. I’m also dad to an amazing little girl, one who is starting to come into her own as a talented all-around gamer. I hope to instill in her the joy that comes from exploring and experimenting in games, the ways to test and learn and grow while playing - and, with a little luck, share those with you as well.
previous post

Color the maps? Who would do that??

Please do!
One of the reasons I made a map of the town was so that kids could interact with it. One of the later modules suggests that parents let the kids show what path they’re taking between different locations in Bayhaven.
Maps are fun!

[…]  Check it out! In celebration of our first review, I’ve posted two coupon codes over at Drive Thru RPG. […]