Coder Mindz is the latest programming game from the maker of Coder Bunnyz, nine year old Samaira Mehta along with her brother Aadit.  In Coder Mindz, you are a programmer of a bot in the year 2045.  Players create code and train their robot to “identify” images and collect data, using tokens represent the images and date. 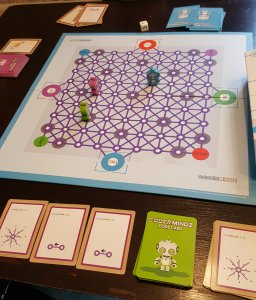 Coder Mindz has multiple levels of play which increase in complexity as you move through the levels.  Each level adds additional coding skills and strategies.

Like its predecessor, Coder Mindz has you using cards to program the motion of your Bot to land of their end point. There are multiple variants which increase in difficulty as you gain skills in the game.  Zap cards are also incorporated in multiple variants.  Zap cards send an opponent back to their starting space. 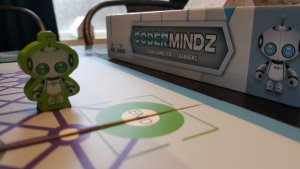 In the Training mode, players start by becoming familiar with the Code Cards and how they can plan bot movement with basic Code Cards.  Advanced Code Cards are introduced only one per turn in Advanced Training.

Image Recognition incorporates one image token which is split into two pieces.  Players place the two pieces strategically on the board.  Before the bot reaches their endpoint they need to collect both image pieces. Players can scale the level of difficulty by adding or omitting advance function cards as well as Zap cards.

Autonomous mode of play has players plan their whole code before moving their Bot. Players then execute the code they developed correctly.  Players place the image tokens on the board.  They take turns rolling the die to determine how many cards to draw each turn.  Once determining the next steps of their code the cards are placed face down, so the players have to remember where it would put them on the board. Once a player thinks they have “programmed” their bot to collect the image tokens and arrive at their endpoint they announce that their code is complete.  The player then flips their cards over an follows the code to move their Bot.  If the code is successful the player wins, if not they have a chance to debug their code, but can not win the game.

Coder Mindz presents the concepts of coding in an accessible format for a young player, but it is also engaging for older players.  Having three modes of play with two levels of difficulty at each level makes the game easy to scale based on the age of the players as well as the experience they have with creating code.

I introduced Coder Mindz to two 6-year-olds at a family gathering, and both kids picked up the basic game within minutes.  They were so engaged and excited by the game they wanted to play again as soon as our robots got to their endpoints.

Of the coding games I have had the opportunity to play, Coder Mindz is the most streamlined and easy to learn.  The limited number of variants keep it from being overwhelming, and the components are easy to manage for younger players.

This is a great tool for teaching code at any age.  The Bots are adorable and engaging for players of all ages.  The Autonomous Mode is challenging and demonstrates the accuracy and precision needed in writing code.

Coder Mindz is a great introduction to coding by using cards to program motion.  Of the coding games in my library this is my favorite.

FCC Disclosure: A copy of Coder Mindz was provided for review.