Loopin’ Chewie has a player elimination style with a bit of a twist. Once all 3 storm troopers are knocked below a player is no longer eligible to win the game. They may however continued to play and try to knock the millennium Falcon into the storm troopers of their opponents. The last player with with Storm Troopers at the end wins the game.

Games are played very quickly with a simple reset. This lends the game to be played multiple times in a row.

Loopin’ Chewie is quintessential family game. With it simple set up, simple gameplay, and fast play it encourages multiple plays in one setting. The format allows for multi age and multi generation play, by being so simple and requiring little skill or strategy.

The Star Wars theme is engaging across the ages too. It is not the most portable game, being a medium size box. However the pieces do disassemble easily to fit back in the box, which is convenient for storage. For a quick light game Loopin’ Chewie is a great game in a family collection. 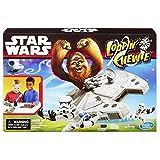 For any young Star Wars fan Loopin’ Chewy is a great addition to a family game collection. It is a good quick game that takes moments to set up and play.

The Top 10 Best Family Friendly Video Games of the Decade

8 Great Games for Your Nintendo Switch Under $20!