Bumúntú is a two to four player game by Gameworthy Labs designed by Tim Blank which is in the final stages of development and was available to be played in its prototype form. It is an animal themed game which also incorporate cultural elements of the Kongo culture in Central Africa.  It is being published by WizKids and will come to market sometime in 2018!

We had a chance to play a prototype version of the game before its designer found a publisher and came away very impressed. We had a STRONG feeling that Tim would find a publisher so we held our impressions until we knew for sure that had happened. 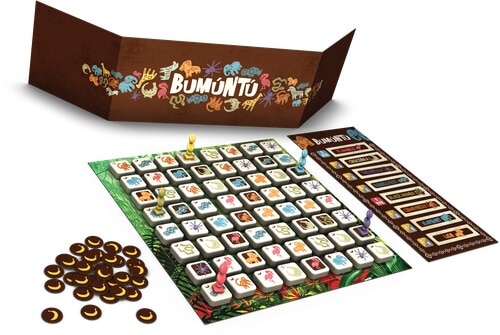 At the beginning of the game an animal token is placed on each space of the game board. Each player received a pawn and places it on a animal token on their turn.  They can move one space at the beginning of their turn and if the player lands on an animal they can perform a certain movement depending on the animal. For example the flamingo can fly up and land on any flamingo token on the board, and the rhinoceros  can go in a straight line to the end of the board and knock any player’s token out of the way.  The players also collects the animal token when they land on them. There is a symbol on the token which indicates and additional task to complete.  Symbols include Crops, Nkisi, Yowa and bordered tokens.  Tokens with a border the player can move one animal on a scoring continuum, which bumps others around.   Nkisi earns players points at the end for most collected and second most collected.  Yowa gains points at then end of the game according to position on track.  You can move your token or opponents when you collect a Yowa token.  There are four positions on the track 0, 1,3,6 and it goes in a circle, so you could bump an opponent to zero.  Crop tokens allow you to collect a crop cards. To earn points you try and gather unique crops, and the number of unique crops dictates your score in that area (based on the scoring guide).  The crops were also foods commonly grown in the Kongo.  Once all the animal tokens have been collected the game ends.

This game has good potential for a family game for older children.  There were multiple steps to each turn in the game and the strategy and the scoring was a bit complex.  The movement for each animal was different, and there was too much complexity.  While there was no age noted on the game, this is easily and 8+ game for an experienced gamer, and may be better suited for a 10+ recommendation.  The basic content of the game is family friendly and all elements of the game have significance or symbolism for the Kongo Culture.  The game has the potential to spark an interest in learning more about the Kongo culture and can be a wonderful social studies link in older children.

Bumúntú is an interesting and entertaining game. The game play which multi step per turn was fairly easy to learn, and the game was fun to play. Overall, Bumúntú was enjoyable to play and could be a good addition to a family game collection when it is published later this year!