Anyone who has ever dreamt of rocking out on stage in front of thousands of fans should definitely take note. If you have then this fall is going to give you the chance to “unlock that fantasy” and feel like a rock star with the newly announced Guitar Hero Live.

Activision is the publishing giant behind a few art house games that some of you may have heard of, Skylanders and Call of Duty, and they are taking a stage dive into the rhythm game genre again after a five year absence. This time, however, they have several tricks up their sleeves to help differentiate themselves from the competition.

First and foremost, they have completely redesigned the iconic guitar controller. Fans of the previous Guitar Hero games will recall the five distinctly colored buttons that lined the neck of the guitar. those buttons have been removed in favor of two rows with three buttons each. They did this because they found, while doing research regarding the way that players used the controller they found out that the vast majority of players only used three fingers anyways. They knew that fans would likely lose their minds because gamers typically hate change, but this had the added advantage of making easier modes far easier (allowing for greater accessibility) and the harder modes even MORE difficult by using chord shapes that involve buttons on both rows. 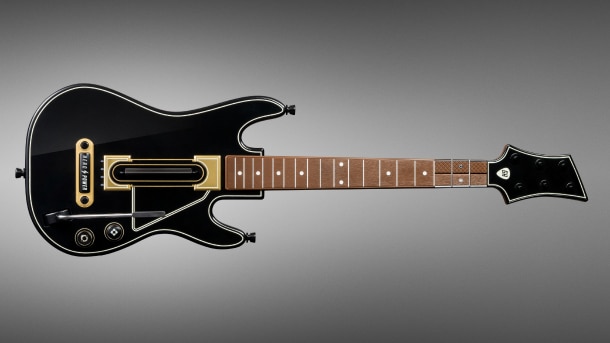 Second, they have done away with the animated action. Every frame that you will see is a live band performing in front of a live audience. Even better, each song was recorded separately with a crowd in venues of different sizes ranging from a small lounge all the way up to a massive outdoor festival with tens of thousands of people. Even the player bandmates were filmed.

Thirdly, the entire experience is designed to give players as authentic of an onstage experience as possible. The reactions from both the fans and the band themselves are tuned to the players performance, just like in real life, perform well and the audience will buy in and sing along! But, if you start to falter you boo and harass you; even your bandmates will start to give you the evil eye.

The entire package looks like it will be a rocking good time and will be releasing this fall on PlayStation 4, PlayStation 3, Xbox One, Xbox 360, Wii U and even some mobile devices.