The ESRB and the remainder of the IARC (International Age Rating Coalition) announced last week that they are implementing a global rating system for digital media. They are implementing this program in concert with ratings boards from across the globe including PEGI in Europe, ClassInd in Brazil, USK in Germany, and the Classification Board in Australia.

The IARC has managed to get all of these different ratings organizations to “agree on a unified process that simultaneously generates ratings for multiple territories while preserving each of their distinct cultural standards.”

What exactly does that mean though?

The ratings themselves will ultimately be the same for each organization. U.S. parents, for example, will still use the ESRB ratings that they have trusted for the past twenty years. The changes will be two-fold.

First, the submission process will change. Developers will be able to submit information about their game to one authority who will assign ratings across multiple territories.

The IACS has actually provided several useful graphics on their website to illustrate the specific process that is followed and how the ratings are assigned. 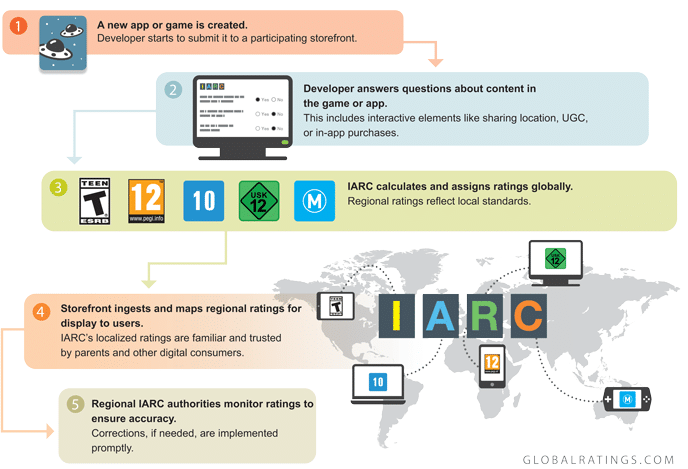 Second, the rating system is being extended to include digital storefronts. The storefronts currently participating are the Firefox Marketplaces and the Google Play store. The PlayStation Network, the Xbox Live Marketplace, and the Nintendo eShop are all on the way at a future date. (The iOS app store and STEAM are noticeable absent from the list.)

We will report further as more storefronts roll out to include the IACS rating system so keep your eyes locked on Engaged Family Gaming!