People have been speculating about the SNES Classic since the day the NES Classic was announced. We even got into the action when we published our definitive SNES Classic wish list a few months back.

The Super Nintendo is widely considered to be one of the best consoles of all time. It was originally released in 1991 (or as our kids call it… ancient history). Nintendo had healthy competition from Sega at the time so they were especially motivated to release quality games, and boy did they ever. The SNES is home to some of the very best games ever made.

Nintendo cherry picked that library to help fill the SNES Classic with an impressive roster. The included games are:

That is an amazing list of games with a lot of variety, but the biggest surprise out of all of them is Star Fox 2. This is a game that was announced back during the Super Nintendo era, but never released officially until now. 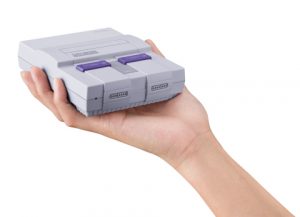 The miniature console, which fans have begun calling the SNES Mini, will match the shape of its older relative, but not the size. This diminutive console is scheduled to launch on September 29th and will retail for $79.99. As of now there are very few retailers offering pre-orders, but that could change in the coming weeks.

A Few Reasons to be Optimistic about Finding the SNES Classic