For anyone who has thought about getting a tattoo, No Regerts lets you enjoy tattoos without the pain or expense!  No Regerts is a tattoo themed card game by Poisonfish Games. It is a two-six player game for ages 12 and up with game play taking between 25-45 minutes.  The object of the game is to fill you “body” represented by card placement on the table around a formation card with cool tattoos and avoid “lame” tattoos.  Players gain and loose points based on the tattoos they collect. 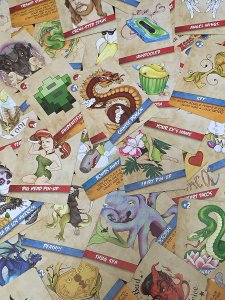 To begin the game, each player draws five cards, and places a formation card in front of them.  The formation card helps to organize the placements of the cards for each body part as it gains tattoos.  There are two arms, two legs, chest, and back to be covered. The person with the most tattoos goes first.  If no one has any tattoos each player rolls a die (not provided )to determine who starts. Each turn is comprised of four steps.

This is an entertaining player versus player card game.  The artwork of the cards is beautiful and detailed.   The tattoos represented are not “adult” themed but some are a bit suggestive. Therefore, players should follow the recommended ages 12 and up. Both the topic and game mechanics against other players make this a better game form older kids.  This is not a game I would feel comfortable playing with younger kids, but is great for families with older children.  Even though each turn has multiple steps it is an easy game to learn, especially for an experienced gamer.  A good understanding of the range of tattoo and enhancement cards allows deeper strategy to be used both for building your own tattoos, and thwarting your opponents.

For a family who appreciates the art of tattoos No Regerts is a great addition to your collection.  While not an optimal game for young players, it is a fun family game that older children and adults can play together and enjoy the theory of tattooing without the commitment of the real thing.

Episode 128: Darryl Jones and Dobbers: Quest for the Key