The 2017 Mensa Select Award Winners Have Been Announced!

Mensa, an organization of incredibly smart people, gathers each year for a full weekend of board games. This isn’t all fun and games though. They are playing games that have been submitted to a compete for, and hopefully earn, the Mensa Select Seal. This distinction is given to five games every year and they recently announced the 2017 Mensa Select Award winners.

Take a look below to see who took the awards home:

Imagine is a game where players race to get their team to guess a code word without saying a word. Instead, they use transparent plastic cards with various images and icons to help lead their team to an answer. The fact that this is a race forces teams to think outside the box in order to cut corners and get the answer the fastest. I have a feeling this one might be tough to play and enjoy in a mixed crowd, but it sounds like a great experience.

Around The World in 80 Days

This is a game by IELLO that is based thematically on the Jules Verne novel of the same name. It is a racing game where players have to carefully manage their resources while respecting the titular 80 day time limit. The designers added some extra challenge by requiring that players finish their trip around the world with less than 10 pounds! This means that players can’t be super conservative with their moves. They have to spend almost all of their money somehow!

Harry Potter is still all the rage in our house so this game was all but a required purchase from the moment it was announced. This is a cooperative deckbuilding game that puts players in the rolls of Harry and his friends as they progress through the stories of all seven of the books. It can be devilishly challenging, but the theme is implemented well enough to keep even younger players interested in the game. USAopoly definitely recognizes that they have a hit on their hands because they have already announced an expansion: The Monster Box of Monsters.

Clank! Is another deck builder where players work together to explore a massive dungeon, defeat challenges, and find secrets. The goal is to move through a deep cavern complex stealing treasure to add cards to your deck. You have to be careful though because each noise you make risks waking up the sleeping dragon. 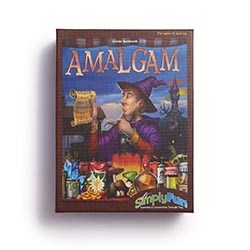 In Amalgam, players fill their cauldrons with an “amalgam” of ingredients to try and craft the most potent potion. You have to use your memory to remember which ingredients are spread around the game board because the potency of your potion is determined by how many of the same ingredient you have mixed into it.

The Definitive Engaged Family Gaming Wishlist for the SNES Classic!

Kickstarter of the Week: Fyra

Games for Beginning Readers: Board Game Recommendations For...