Jon clutched his axe as he made way through the smoke filled room. With the roar of the flames behind him muffled by his mask, the sound of his own breathing echoing back through his respirator became the only sound he could focus on. He stepped over the charred door, blown off it’s hinges from a recent explosion, and entered the next room, scanning intently for survivors. The walls seemed to buckle with the heat, and he knew he only had a few minutes left before the structure became completely unstable. It was then that he noticed the gas can across the room, seconds before the ensuing explosion knocked him off his feet, and darkness engulfed him.

Flash Point: Fire Rescue is a cooperative board game in which players take on the roles of firefighters, making their way through a burning building to investigate “Points of Interest” and locate survivors. Players are constantly battling back smoke and flames, moving about, and even manning the deck gun on the fire truck outside.

How Does it Play?

The goal of the game is to rescue at least 7 of 10 victims from the burning building, before the building collapses. The 2-sided board has an “easy” building layout and a “hard” layout, allowing the difficulty curve to be modified. On each turn, players are provided a certain number of action points to use on their turn, and a variety of actions they can spend on those actions. Moving, opening doors, and extinguishing smoke/fire all have associated action point costs, and players are even able to “bank” unspent action points to use on their next turn. At the end of each players turn, they roll dice to determine where smoke or fire appear, and then apply rules based on conditions on the board (if the space was blank, smoke appears. If the space was smoke, it turns to fire. If it was fire, an explosion happens, etc). As it should, the fire feels random and unpredictable, and yet organic.

The threat of fire feels ever-present throughout the game. Explosions (or even the firefighters’ axes) can create holes in the walls that firefighters can use as doorways, but too many damaged walls and the building collapses. Fires, when left unchecked, can rapidly burn out of control and explode into surrounding areas. Gameplay is quick and collaborative, and leads to lots of choices to be made on a given turn. Best of all, it’s encouraging teamwork and group decision making. When we played with a group of 9 year old boys at cub scouts, the tension was evident, but the boys quickly found ways to talk through their decision making and thought processes, and offer suggestions to each other how they might work together better. 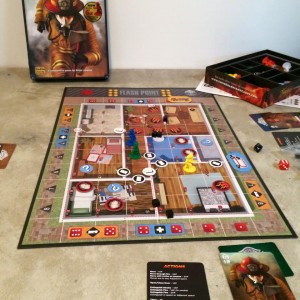 Things are starting to get hot…

One of my favorite things about Flash Point: Fire Rescue, especially as a family game, is the ability to customize the challenge and complexity of the game. As mentioned, the board has an “easy” and a an “experienced” side of the board, which changes how many entrances to the building the firefighters have access to, as well as ( on the experienced side) a building layout more prone to wall damage from explosions and difficult choices to create paths into and out of the building. In addition, though, the rulebook does a great job of providing a set of rules for “family” games, and then a separate set of rules for more experienced players. The experienced rules add more complexity, but also thematic content as well: a more random setup for fire placement, vehicles (both an ambulance and fire engine) that can circle the building, hazmat dangers and “hot spots”, and even specialized abilities for different firefighters. While it may seem like a lot of moving parts, the different mechanics are all relatively balanced, and so can be added piecemeal depending on what you are comfortable with. This level of choice in ramping up the challenge and difficulty really allows parents to customize based on who is at the table, and allows the game to play well with a variety of age groups.

Let’s get this out of the way: there are a fair number of pieces in Flash Point. For the experienced gamer, the wide array of tokens and markers may seem like child’s play, but to folks coming from less complex games, it can seem overwhelming at first, and certainly something to be aware of if there are small children in the household. Additionally, the box that comes with the game is woefully inadequate at keeping the pieces organized, and so setup for the game can take extra time as you sort through the chaos of the box to sort out pieces. I went so far as to build a custom insert for the box (something we will discuss in detail in a future article on Engaged Family Gaming) but this could also be controlled through the liberal use of plastic baggies or other containers.

The components themselves are of decent quality. Most of the tokens and markers are double sided cardboard, though the damage tokens for walls are represented with wooden cubes. Early editions of the game came with Parcheesi-esque, wooden tokens for the firefighters (not very thematic!) but have been “upgraded” to plastic firefighters in more recent editions of the game. We usually try to avoid harping on art direction for a game, but I will say this is one thing that strikes me as odd for Flashpoint (and perhaps only because I come from a visual arts background). The tokens and gameboard take on a very simplified, semi- abstract reality for their design. The specialist cards feature fantastic, realistic and almost gritty illustrations of the different firefighters. The sculpts for the figures, however, have somewhat cartoonish proportions and feel “cute”. The three elements are quite disparate, but not enough to affect any enjoyment of the game. 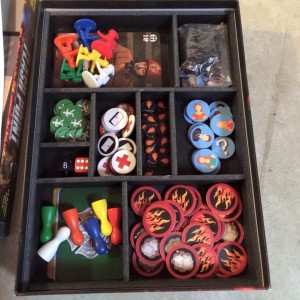 Like any good co-op game, Flash Point encourages kids to work together and made collective decisions to achieve a common goal. Communication is necessary to plan moves and ensure that all of the different threats are covered. Strategic thinking is required, but kids will also need the flexibility to adapt to changing conditions, as a sudden explosion of fire can quickly change the dynamic of the gameboard and force new plans on the fly. Additionally, the game does a great job of making kids realize the danger that firefighters go into daily on their job, and hopefully instills a little more respect for the difficult job those men and women do. 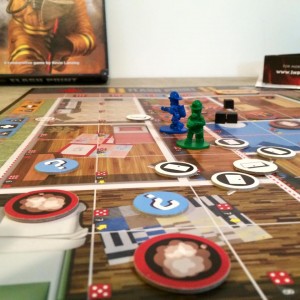 Overall, our family loves Flash Point: Fire Rescue. It’s intense, fast paced, and fun to play. The recommended age of 10+ seems a little high – we’ve played the “family rules” with a group of 8 year olds of mixed gaming backgrounds and had no trouble. The game can even play much younger if an adult or older child manages the “advance fire” portion of the turns, simply because those rules can get a little more complex, but even then our 6-year old was able to understand the patterns after a few turns. With the scaling difficulty and complexity, the game can easily keep the adult gamers in the family engaged and entertained while still making a great family game. With four expansions already released, adding new buildings and more complex and thematic rules, there’s plenty of variety to enjoy, and keep your family fighting fires for years to come.

Celebrating Pi Day With the Founder of Little Worlds Interactive!