GameWright Games was at New York Toy Fair  this year, just like normal, and it was my pleasure to take a look at their 2018 games. Their full 2018 slate was there, with the sole exception of the cooperative game Forbidden Sky.

I was treated to brief demos of most of their games this year. All of them are cute and many of them will do very well, but my attention was drawn to two specific games that I think you need to hear about. 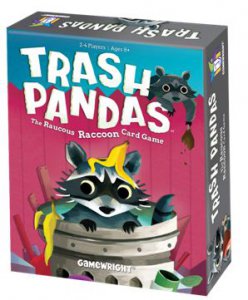 Trash Pandas is a push your luck card game where players take on the role of raccoons digging through a neighborhood’s trash.

The first part of the game involves rolling dice in order to collect tokens that determine what actions are available. There are six tokens representing possible actions that you can take on an turn. You roll a die and claim the token that matches the symbol that comes up. At that point you can either move to the next phase and spend your tokens to take those actions or roll again to try to earn more tokens. If you roll a symbol that has already come up, then you bust and your turn is over. Taking actions will allow you to draw cards, bank them for points, or mess with your opponents. The game ends when the deck runs out of cards.

This is a game that is firmly nestled in Internet meme culture. Trash pandas is a term for raccoons that showed up on Reddit. It has just been almost universally adopted by users across the Internet. Its funny, its vaguely descriptive, but most importantly, it gives you an idea of the sense of humor that this game is built around. It is juvenile, but not crass. This lighthearted fun is involved in every part of the game from the artwork all the way to the terminology used on them. It even influences the box art. Trash Pandas will be releasing sometime in early 2018 and we can’t wait to get our hands on it. 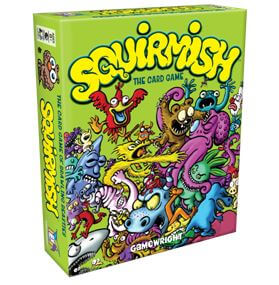 Squirmish is a a card combat game that we reviewed before it was launched on Kickstarter several years ago. The highlights of the game at that point was its square cards, the quirky art design, and interesting combat. This is a new track for GameWright to take because normally they don’t focus on games that involve combat. Instead, they favor games that focus on either cooperation or gentle competition.With that said, this game fits perfectly with GameWright’s other offerings by being lighthearted, silly, and fun.

Combat in Squirmish involves playing square-shaped cards onto the table creating a spiraling battlefield that is referred to as a Squirmish (shocker. I know.).We had our issues with the game initially before the game went to Kickstarter, but most of them were about game balance. GameWright has come through and smoothed out the design. They redesigned the game to make it faster and more aggressive.

Squirmish will be released sometime in 2018 and we cannot wait to get our hands on this new and improved game. Keep your eye on EFG for more information.