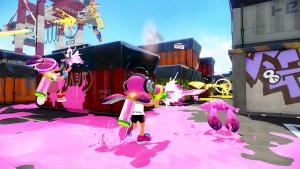 Port Mackerel, one of the multiplayer maps

Splatoon was released a few months ago, but we wanted to take our time to ensure that the game fully matured before we published a final review. The time has come and we are pleased to say that it is worth the wait. Splatoon is the real deal and is a must own for just about anyone who owns a Wii U.

Nintendo has been given a lot of flack over the years for sticking to their guns and only releasing games based on their storied franchises. Its certainly fair criticism in general, but when they do take risks it can result in some amazing success. They have a talent for taking a game concept, locating the “fun” in the game, and enhancing it to the point of near perfection. Splatoon is clearly the result of Nintendo staring down their scopes at the online shooter genre and making it their own.

Splatoon, at its core, is just what I said above. It is a four on four multiplayer shooter where players take control of teenaged squid kids that use super soaker style weapons to engage in crazy ink battles. The most common mode that your family play is called a “Turf War” in which two teams of squidlings fight across various maps. The key difference between this game and dozens of other online shoots is that a team can win without firing a single shot at other players!

The standard issue violence that is present in most shooters is replaced by a system that rewards players for shooting the ground around them and move on. Turf wars are won by the team who has covered the highest percentage of the map within the  (extremely short) three minute time frame. This isn’t and simple as is sounds though as your opponents can cover up your ink after you have moved on. You may not need to fight your opponents, but you definitely need to know where they are to make sure they aren’t painting your base.

Movement is also of particular note here because the bulk of your time spent moving around the maps in Splatoon will be as a squid type creature that can swim through the ink on the ground at a rapid pace. You do, however, get stuck in your opponents ink. This adds a speed and mobility to the game that is really unmatched in other games in the genre.

This will be a remarkably easy game for your family to pick up and play, because even if you aren’t sure about the fine details of the game you can help your team win by using a giant paint roller and covering large swaths of territory while you avoid the other team.

Splatoon also might be one of the best looking games we have seen all year. There may be games out there that are more photo realistic, but Nintendo chose to stick with a very cartoonish aesthetic that just screams “fun.” The character designs are silly and possess a whimsy that we haven’t seen in other Nintendo games in a long time.

The one complaint about Splatoon that held merit at launch was that it did not have a huge pile of content, but that is being resolved in small chunks almost weekly. In fact, we reported earlier this week that a MASSIVE patch is on the way that will include several new game modes and two different weapon types. 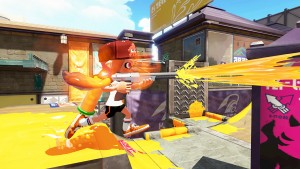 At least one gun should look familiar to parents!

The elephant in the living room here regarding family play is that these characters may not be shooting bullets, but they are shooting guns at each other.  Families that take issue with the use of squirt guns and NERF guns will likely take issue with this game as well.

Nintendo games are generally a safe place for online play, but the inclusion of community MiiVerse posts in the game does risk exposing your kids to some crude humor that happens to slip past the community filters.

One of the standard concerns that parents have with online play is the presence of voice chat. That is not an issue with Splatoon in the slightest.  Some core gamers lamented Nintendo’s decision and called it a mistake, but parents across the world have celebrated the ability to let their children play online without them hearing foul language. 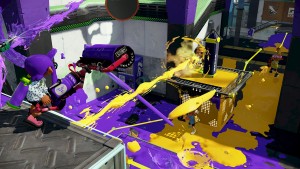 Tower Control – one of the game modes in the ranked battles!

When all is said and done, Splatoon is an online shooter. Playing the game does require proficient use of the Wii U game Pad controller. Players will need to be able to move around with the left joystick and aim using their choice of motion controls or the right joystick. The fact that there is a choice here is great, but neither of them is much “easier” than the other.

There is some reading involved in the game, but most of the weapons, equipment, and game mode are identifiable using standard iconography that even early readers will pick up on after a few sessions.

Our youngest tester is six and he has been able to play with proficiency. He is rarely the best player on his team, but he is always able to contribute something to his team’s strategy.

If you own a Wii U, then this is a must own. Splatoon is an early contender for our game of the year and I am not certain that there are any games on the horizon that can challenge it as we look towards the end of the year.

Splatoon to Receive a MASSIVE Update on August 5th!