Activision held an event at the Best Buy Theater in NYC today to give a small group of reporters a first hand look at Guitar Hero Live and Engaged Family Gaming was lucky enough to get an invite!

I represented EFG at the event and got a LOT of hands on time with the game. There were only three songs available, but all of the difficulty modes were active and I took my time to go through them all to see how it would all play out.

The difference in the presentation was clear from the minute I strapped the guitar on. Each song started with a first person view of a backstage area while my bandmates and I prepared to rush out on stage and begin our set. Activision was showing us the massive outdoor festival locations today, so running out on stage drew thunderous applause from the massive army of fans spread out before me. Every time the camera panned out across the audience I got a little more nervous even though I knew it was just a video. Activision made it clear during their presentation that they wanted to make a game that actually gave players stage fright. This definitely felt like it was working (although it could have just been the ever-so-cheerful PR person or the large group of other press watching me). 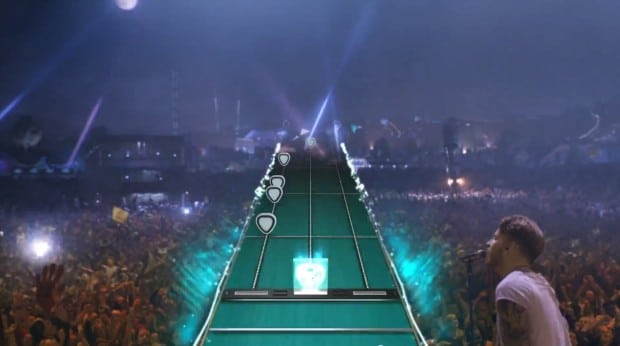 It looks different, but the gameplay will be immediately familiar to anyone who has played before!

After a short intro and several generous looks out across the crowd it all came crashing down on me that I had to actually play this thing. The vertically aligned bars that have been the hallmark of the Guitar Hero franchise faded into view and a series of black and white guitar picks glided down the lines as opposed to the colored gems I was used to from before. The difference was alarming since I was very used to the older style, but it was very intuitive. I really don’t think that new players will struggle to pick up the controls.

In fact, the rookie difficulty level only included three buttons so it should be even easier for novices (and younger players) to pick up than previous. I tried that difficulty and had the crowd fired up quickly and kept them going. It was a  lot of fun playing and really getting into the rhythm of the music along with the fans.

That all changed when I switched over to more advanced difficulty levels that used both the top and bottom rows of buttons. Making those transitions was very difficult without practice. I got a little bit better over the course of a few songs, but it left me feeling a bit frustrated. There is room for improvement though. I could tell immediately where I would need to improve if I wanted to succeed moving forward. Parents should definitely be ready to step in with help for more ambitious kids. Keep in mind that you can change difficulty mid song, so if it just isn’t working you can always step it down.

The entire experience was great and I was left wanting more. Fortunately, we don’t have to wait long since the game will launch this fall for just about every console under the Sun.

gloria estefan turn the beat around