Top Posts
8 Games From Essen Spiel 2022 That We’re...
11 Board Games That Help Teach History!
How to Play “Frustration” – an EFG Family...
Family Board Game Review: Fyra
Tips for Completing Jigsaw Puzzles
Step By Step How to Play Roller Coaster...
Board Game Definition of the Week: Trick-Taking Games
Family Board Game Review: Kingdomino
Board Game Definition of the Week: Meeple
Building Sportsmanship with Board Games
Home » No Disney Infinity 4.0 This Year; More Playsets Instead
News UpdatesHome Consoles

Editor’s Note: This article was written and submitted to us by the owner over at Token Meeple. It’s a little out of their genre over there, but we sure loved the help! Head on over there for their take on grown up board games (including some great single player stuff)!

Today Disney presented us with the first edition of Disney Infinity Next. If this 12-minute announcement was any indication, there are big things in store for Disney Infinity 3.0 over the next few months and the remainder of 2016.

During the opening sequence we were reminded that Disney Infinity, for the 2nd year in a row, #1 in the Toys-to-Life category. The 3.0 release will be the largest collection of content inside of a Disney game and will remain compatible with the 3.0 base.

The next announcement focused around the upcoming release of the Zootopia movie this Friday. Nick Wilde and Judy Hopps bring a bit of a stylistic change from previous Infinity characters and look like they just walked off the movie set and into the game. They are available for purchase as of March 1st for the Disney Infinity Platform. Judy is the agile and quick character who will specialize in powerful kicks and will have her Tranq gun from the movie to help stun characters in game as well. Nick is a very strong melee character who will have his Popsicle stick referenced from the movie to help him out. He also has a friend “sidekick” who can help him out and use the Popsicle as well.

The next announcement was what really caught our attention. The Marvel Battlegrounds Play Set!! At one time we all have wondered who would win in a fight between say Captain America and Iron Man, and now we can find out! Also, for the first time, a Disney Infinity Play Set will feature 4-player play and it seems it will happen without another base. Battlegrounds will feature 8 arenas’ that take on a life of their own. The Arenas are almost a character themselves. They take damage leading to a lot of Environmental Destruction and potentially causing you to fall between levels or open up other new areas of the Arena. And lets not forget, the Marvel Disney Infinity 1.0 and 2.0 characters have been refreshed to include new abilities and super abilities within the Battlegrounds.

All of the Marvel Characters have been balanced within the Play set to make the combat more competitive. 4 new characters will be released at around the same time the Play Set is available. These new characters will consist of a new Captain America from Captain America: Civil War. This combat focuses much more around his shield in this version and his special ability is a Heli-Carrier strike that he deflects with his shield for a powerful AOE attack. 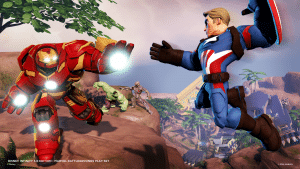 The other new characters we will be seeing to hype this play set are Black Panther, who will be another character who excels in Martial Arts agile melee style. Vision, yet another quick character, changes it up with his special ability allowing him to phase into the ground, perform an uppercut and transition that into an air combo. This is a new ability type that hasn’t been introduced into Disney Infinity yet and shows that Disney is committed to pushing Disney Infinity to new heights.

Then we get one of my most wanted, Ant-Man. You read that right, we will finally have Ant-Man in Disney Infinity shrinking power included!! Ant-Man will be a very defensive character but because of his shrinking ability he will be able to surprise people and catch them off-guard.

The final announcement of the initial Disney Infinity Next featured the live action remake of The Jungle Book. Well now hopefully you are asking what does this do for Disney Infinity, and the answer is Baloo! This figure is modeled beautifully and you can picture Baloo dancing and singing Bear-Necessities when you lay eyes on it. In game, Baloo can swing a Palm tree as a melee weapon and throw various fruit at his enemies. Baloo also attacks his enemies with his belly and rear end, and we can see him being a favorite of many children.

I have to admit, this was a pretty exciting 12 minutes and Disney teased with just enough to have me looking forward to each new wave release. Even with all of this being announced, I would still expect a surprise or two from Disney on the Infinity side, after all there is still a lot of Disney left unexplored on the Infinity platform. I am still waiting for something from the Junior side of the house as well!