Board Game Review: Lost Cities – The Board Game

The research teams are outfitted and ready to embark on their adventures to find five forgotten cities. Who will lead the way to fantastic discoveries? Lead your team of explorers on up to five expeditions! Along the way, be sure to search for artifacts and interesting shortcuts. Be careful! If you take too long, your competition will discover the forgotten cities first!

Lost Cities- The Board Game (please note that there is a 2 player card game version of this game) is a light & simple to understand family game designed by the famous game designer Reiner Knizia. It is based on the 2008 Spiel des Jahres winner Keltis. It’s pretty much the exact same game with a different skin. While Keltis had a traditional and very *green* celtic look and style, this has more of an Indiana Jones type of explorer theme. 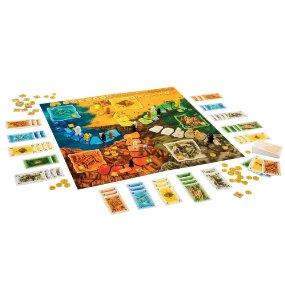 The components are very high quality. The board is bright and colorful and is in keeping with the adventure theme. The cards are good quality and the explorer meeples are cute and also great quality. Some of the tokens are kind of small, which may be troublesome to younger players.

The rules are very clear and well laid out. The game mechanics are quite simple and consist of basic counting, card management, and a bit of strategy and luck. Each lost city is found at the end of a path of 9 stepping stones. Players play a card numbered from 1-10 of the correct color to to move their explorers along the corresponding colored path to get to the city. It’s important to play lower numbered cards first because each subsequent card placed to move your explorer on the path must be equal or higher than the card facing up. As explorers move along the path, they can encounter events which add excitement and a bit of challenge to the game. The strategy and tactics involved come into play when choosing which cards to hold onto and which cards to discard. There is a bit of risk assessment involved. Do you select the specific cards you need to move forward? Do you hold on to cards that your opponent needs to move forward? The player who wins the game has the most victory points after three expeditions. Some of our adult players were frustrated because they weren’t able to keep track of scoring to see how well people were doing until the very end. That may or may not be a problem for your group, depending on the type of players you have.

This game is very easy to grasp for younger players. There is no reading involved, so as long as your child recognizes numbers and can handle number sequencing well, then they should be able to play this game. We’ve played with our 7 year old and he did well, though we had to use the shorter variant in the rule book because he lost interest fairly quickly. The 10 & Up rating seems to be a bit of a stretch since a group of 8 and 9 year olds were able to play independently after the rules were explained. This might not hold the attention or be super replayable for older children, especially those well versed in Euro games.

If you are looking for light and casual game that is easy to learn and explain to other players, then this is a game for you. While replay value for older players only isn’t particularly high, this is a great go to game to play with your kids that doesn’t leave the adult players bored and frustrated. It’s a fun game to pull out on a rainy afternoon or a snow day that to whole family can enjoy together. Though the MSRP is a bit high ($39.99) it is in line with many other Euro games. It’s important to note that you can find the game at a much more reasonable price online.