Top Posts
Family Game Preview: Château
Gaming Definition of the Week: Analysis Paralysis
Tips for Playing Dungeons and Dragons with Kids!
How to Play “Frustration” – an EFG Family...
Great Games to Make You Laugh
Raising a Chess Prodigy: Tips and Tricks for...
EFG Essentials: Great Board Games for Kids
8 Games From Essen Spiel 2022 That We’re...
11 Board Games That Help Teach History!
Family Board Game Review: Fyra
Home » A Dad Made a Custom Dungeons and Dragons Character Sheet for his 6 Year Old Son; We Interviewed Him!
Board GamesTabletop Roleplaying GamesParent Resources

A Dad Made a Custom Dungeons and Dragons Character Sheet for his 6 Year Old Son; We Interviewed Him!

We love to hear about parents trying new types of game experiences with their kids. We recently found a father on Facebook named Casey (shout out to the RPGs with Kids Facebook group) who not only introduced his six year old son to Dungeons and Dragons, but created an awesome placemat style character sheet to help guide him. Take a look at the picture below. It’s AMAZING.

We thought it was cool enough that we wanted to chat with him briefly about his experience with his son and maybe get some perspective on Dungeons and Dragons with a youngster.

How long as you been gaming?

To be honest, I’ve only been into the tabletop life for 2 or 3 years. But I’m the type to dive in head first and completely submerge myself into a passion. In that time I have become my group’s main DM and have been the one to teach them all the rules. I’ve studied under the YouTube masters to perfect my craft, though I still have a lot to learn.

Be honest, how long have you been waiting to introduce DnD to your son? Were you putting giant fuzzy dice in his crib or what?

Pretty much from the moment he learned to read and do basic math. (Haha) 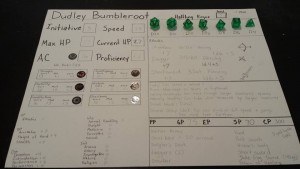 We love the character sheet that you made for him. Did you find a template for that online or was it entirely your design?

It was my own design. I remember, starting out, the questions my buddies all asked, and the difficulties they seemed to have. “What do I roll for this?” “Can I use my bow at close range?” “Which one is the d20?” So I just tried to make it as detailed as possible. I made a little bar up top to organize his dice. I labeled his weaponry and drew a picture of them next to it. I added little stickers to his stats to help him know the differences. It really seemed to help. So much so, that I made a v2.0 sheet the next morning.

It looked like he was playing a halfling character based on his name. Was it a stock character? Or did the two of you do any custom character creation?

Ah. Dudley Bumbleroot. This was actually the FIRST PC character that I ever played. Kind’ve a family heirloom. I updated him for 5e D&D but, barebones it’s the same character.

A lot of people that want to tabletop with their kids hesitate because some of their early struggles can disrupt a game groups flow. How quickly did your son take to the game?

By, probably, his 5th turn he was going strong. He was giving the group his ideas and telling them things like, “hey I can fit through this Crack in the wall, right?” I was so proud.

I have a six year old myself and have been thinking of taking the plunge. What advice do you have for me? Anything I should make sure that I do?

Just have fun. Be his buddy. Or if you’re the DM, have another PC be there for him. Kids can pick up on things more quickly than you realize.

He was the only person in the picture when you posted on Facebook. Did you play with anyone else? Or was it a one on one game for simplicity?

I had a couple other buddies with him. He fit right in.
You indicated that you ran the Lost Mines of Phandelver as your quest with your son. Did you have to modify it at all? Or did he pick it right up? He picked it right up. As far as difficulty, that’s a level one adventure, as it is from the starter set. He did have a BIT of an advantage, though. He and the others at the table were level 3 to begin.

What’s next for your gaming group? Are you going to create your own campaign? Or perhaps run some of the prepackaged adventure books Wizards is putting out?

I usually create my own, but they always turn out very linear. I wanted to try my have at something with some depth. Side quests and plot twists, you know? After one session, I’m pleased. I’ll still make you own, but I’m learning new tricks as I go.