I pressed the letter into the guard’s hand and expressed to her how important it was. “Get this to Princess Annette at all costs and as quickly as possible,” I said. Ever since her mother, the Queen, was arrested the princess locked herself in the palace. The only way to gain her attention now was to sneak a love letter to her, but I had to be swift. Surely other suitors were attempting to do the same at this very moment.

Love Letter is a very easy and fast moving game. The object of the game is to get your love letter closest to the princess while preventing others from doing the same. Each round represents one day. When the princess has received enough letters from one suitor she grants him permission to court her. Whoever wins the princess’s heart also wins the game. 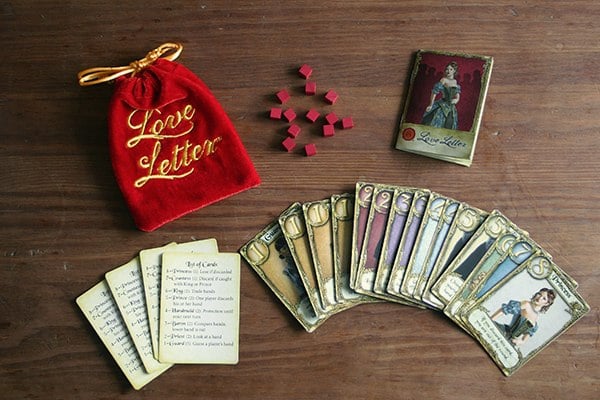 The game has only 16 cards. Each card has a picture of a character, a number representing their rank and text that explains what happens when the card is discarded. The game also comes with 13 wooden tokens used to keep score as you play.

The cards are pretty simple and have nice artwork depicting each character. Many players find it fun to replace the tokens, which are small wooden cubes, with small gem hearts easily found at any local craft store.

Game play is quite simple. Each player is dealt one card and one card is left out of the game each round. In two-player games four cards are left out. The game starts with the last person who most recently went on a date.

On his or her turn a player draws one card and then discards one of the two cards in their hand. As they discard this card face up in front of them they must apply its effects, even if they are bad for them. For example some effects will cause you to be eliminated from the round if you discard that card. Others force a player to discard their card and draw a new one or allow you to peek at another player’s card.

The goal is to try to have the highest ranking card in your hand at the end of a round, which can take a little strategy to do. Drawing the princess from the start, the highest ranking card in the game, isn’t always a good thing. A round ends when the deck is empty. All remaining players compare their cards with the highest ranking card winning. The round also ends if at any time all players, but one, are out of the round. The remaining player would then win. The winner of a round receives a token of affection, the cards are shuffled and a new round begins. Once a player receives 4 – 7 tokens, depending on the number of players, they have earned the affection of the princess and win the game.

The game is rather fun to play and has a surprising amount of strategy for having so few cards. There is an element of luck at work here too, so those who do not enjoy games where a lucky guess can influence the outcome may not enjoy this too much.

The game is very easy to learn and teach. You never have more than two cards in your hand and the cards tell you exactly what to do. Even someone who does not play games often will pick up this game and understand how to play after seeing one turn.

The game plays very quickly as well. Once everyone gets the hang of the game it is common to have an entire game done in ten minutes. It is very easy to play several games in a row. It is also a very portable game and easy to take with you to play just about anywhere. It comes in a small red bag embroidered with the name of the game on it. A child should be able to pick up and learn this game very easily once they are able to read and understand the cards. The need to employ an elaborate strategy to win this game is not necessary. Usually the most complex a strategy needs to be is figuring out what cards have been played already to try to guess what might be in your opponent’s hand. Though with at least one card being left out each round you never can truly know.

It is most fun to play this game with three or four players, but the game plays with two players surprisingly well.

If you are looking for a game with a cute story, simple rules and a lot of replay value I cannot recommend this game enough. It is frequently the game we use to break the ice on a game  night with friends and family.

Nintendo Announces Their Own 2015 Film Awards